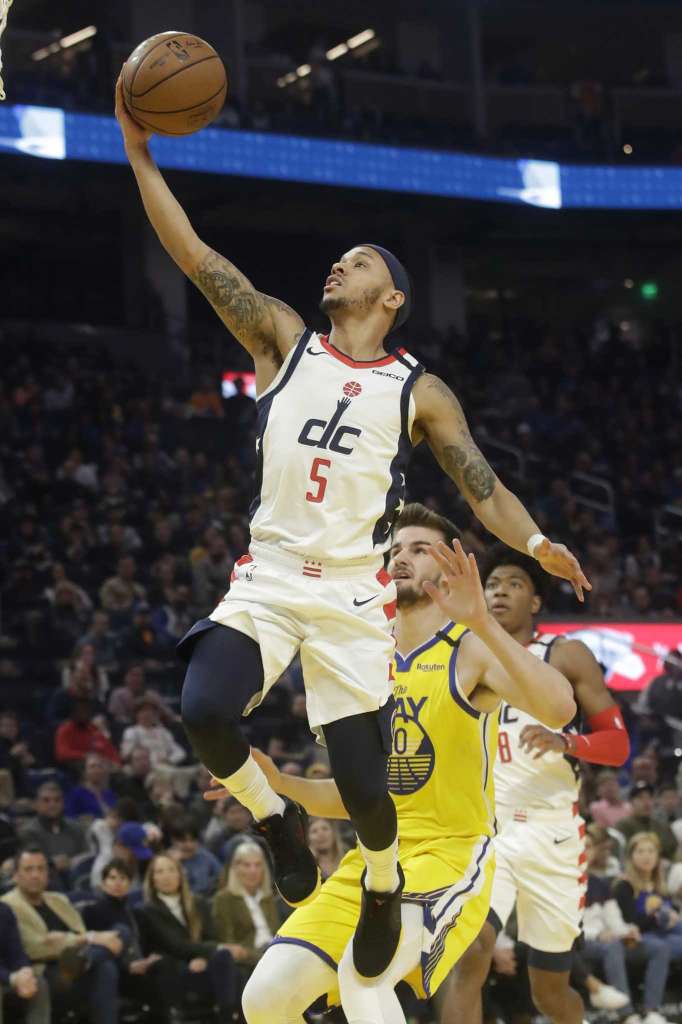 San Francisco- The Golden State Warriors, playing their second game on consecutive nights, fell to the visiting Washington Wizards 124-110 Sunday evening at the Chase Center. The Warriors were hoping to win their second in a row. They beat the Phoenix Suns Saturday night in Phoenix. Their hopes were dashed by the Wizards’ Bradley Beal and Davis Bertrans.

For the second night in a row, the Warriors were down to eight players. Jordan Poole returned to action, but Draymond Green, Ky Bowman, and Kevon Looney did not play.

Both teams were competitive in the first two-quarters of play. The Wizards won the first period by seven points 35-28. The Warriors won the second quarter 29-28 to finish the first half trailing by six 63-57. The Warriors thought they had a chance to win with a strong third quarter.

That did not happen. The third quarter went to Washington 31-19, and now the W’s trailed by eighteen heading into the fourth quarter. The W’s won the fourth quarter by four, but it wasn’t enough. The Wizards win 124-110.

Game Notes and Stats- The Warriors’ record dropped to 13-48. They have 21 games left on the schedule. The Wizards improved to 22-37. Neither team will be in the playoffs this season.

The Warriors had six players in double figures. Andrew Wiggins led the team with 27 points, six rebounds, and two assists.

Wiggins is eager to finally play with Curry and see how “that’s going to open up the floor for everybody else.”

“It will make a big difference, especially for people who can drive and attack the basket because Steph attracts a lot of attention,” Wiggins said.

Eric Paschall, Jordan Poole, and Mychal Mulder each had 17. Damion Lee had 12. Marquese Chriss finished with a double-double.

Bradley Beal had quite a night for Washington. He had 34 points, eight assists, made seven threes, and had five steals.  Beal has scored at least 25 points in a franchise-record 18 straight games. Davis Bertrans, the third-year player from Latvia and coming off the bench, tallied 29. Rui Hachimura, the first Japanese player in the NBA, had 18 points and eight rebounds. Thomas Bryant had 12.

It was the first win on the Warriors’ homecourt in six years.

Steph Curry missed his 56th straight game since breaking his hand. Curry was hoping to play Sunday night, but Warriors’ head coach felt he needed more scrimmage time. The hope now is Curry returning Thursday night. Curry will practice with the Santa Cruz Warriors on Monday. Wizards coach Scott Brooks enjoys watching the West Coast games when his team is done out East — and he has missed Curry.

“I’m sure he was intimidated by the defense our team has been playing this year. He didn’t want no part of it,” Brooks joked before the game when asked about Curry’s imminent return. “It would be exciting for not only his fan base, his coaches, and team to have him out there.

He’s one of the greatest players to ever play, one of the greatest shooters to ever play and causes so many problems for opponents. He makes shots that are almost impossible to go in, and you have to be next to him whenever he crosses half court, which opens up the floor for the other players to drive. He’s been missed by the whole basketball world. … You could turn on games at 10 o’clock at night, and you get a lot of basketball, and he’s always been fun to watch.”

The Warriors meet the Denver Nuggets in the Mile-High City Tuesday night. The game time will be at 6:30 pm. They return home to face the defending NBA Champion Toronto Raptors Thursday night at the Chase Center. That game will start at 7:30 pm.