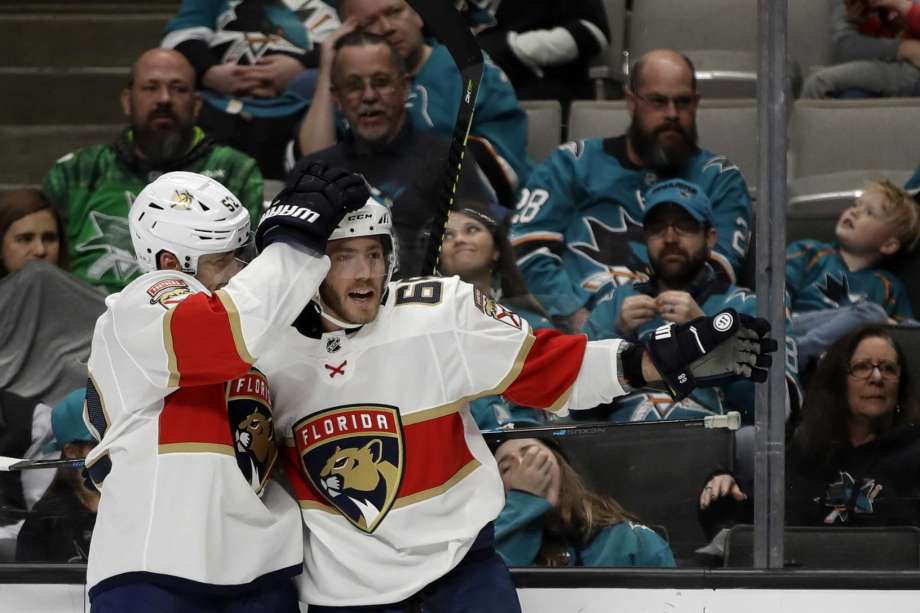 photo from sfgate.com: Florida Panthers’ Mike Hoffman, right, celebrates after scoring a goal against the San Jose Sharks in the second period of an NHL hockey game Monday, Feb. 17, 2020, in San Jose, Calif.

SAN JOSE–The desperate Florida Panthers started the first game of the dreaded three-team California gauntlet with a 5-3 win over the San Jose Sharks in a Monday matinee. Sergei Bobrovsky made 29 saves and Evgenii Dadonov, Mike Hoffman and Colton Sceviour scored for the Cats while Dylan Gambrell, Kevin Labanc and Timo Meier scored for San Jose who were coming off two-game road winning streak.

The Sharks continue to be without a core group of players with Logan Couture, Tomas Hertl and now Erik Karlsson out with injury and Evander Kane in game two of a three-game suspension for an elbowing penalty Friday in Winnipeg.

They may add another player to the walking wounded after Antti Suomela exited the game after the second period after taking a hit from Josh Brown.

Dadonov opened the scoring for Florida when the Sharks defense loosened up enough for him to slip in and take a Frank Vatrano feed to beat Aaron Dell 4:52 into play. Gambrell picked up the equalizer, his fourth goal of the year, on a pass from Suomela right into the slot 11:30 into the period.

The Sharks fell behind 2-1 halfway through the game when Mike Hoffman picked off a d-to-d pass in his defensive end and went end-to-end before burying the puck 22nd goal of the year. A wild third period started with Colton Sceviour firing a puck on Dell, following up on his rebound and scoring at 10:04.

Kevin Labanc answered back with a strike with 5:26 left in regulation to open up a six minute span that saw teams swap four goals. Anton Stralman, Meier and Vincent Trocheck all scored down the stretch for the 5-3 final.

Next up for the Sharks is a four-game road swing through the Tri-State area, facing off against the New Jersey Devils, New York Rangers, New York Islanders and Philadelphia Flyers before returning home to the Shark Tank to face the Devils once again February 27th.