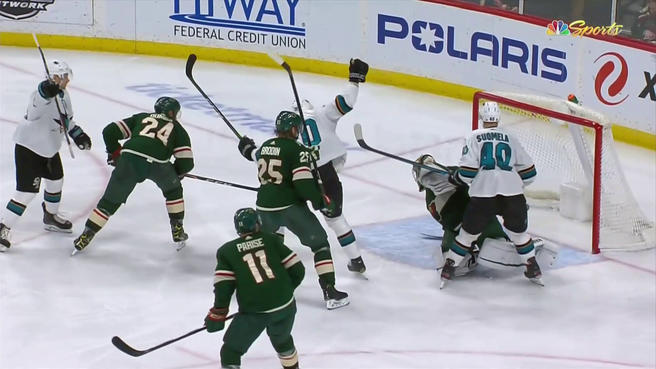 The San Jose Sharks shut out the Minnesota Wild 2-0 Saturday at Xcel Energy Center in Saint Paul. It was Martin Jones’ first shut-out of the season. He made 39 saves in the win, with goals from Dylan Gambrell and Melker Karlson. Alex Stalock made 19 saves on 20 shots in the loss.

I think you have to give credit to the players. Facing the injuries that we were facing, and, I think, a little bit of adversity, and Jonesy coming in there and doing the job. I know they wanted to play hard for him. I thought we really defended well. You know, we gave up 39 shots and they threw a lot at us but I thought we played hard and I thought Jonesy made the saves that he had to.

Asked about Dylan Gambrell’s goal, he said: “That whole line, the True line, I think they did their job. I had to put Dylan out there as a right-hand shot on a couple of key face-offs against some really good players and he did a really good job. And they chipped in with a goal 5-on-5 and that always helps, if you’re getting some depth scoring. And a lot of our skill is out and guys like that have to step up.”

The Sharks went into Saturday’s game in Minnesota down two more players as well as Tomas Hertl and Logan Couture. Evander Kane received a three-game suspension for an elbow in Friday’s game against the Jets. Kane’s comments on the NHL’s decision can be found on Twitter. The NHL may have a public response to those comments but they have not made one yet.

Erik Karlsson injured his hand in the same game and the team declared the defenseman out for the rest of the season. The Sharks filled out the roster with Antti Suomela and Tim Heed, who have both played with the Sharks this season. Heed last played on January 16 and Suomela played on February 1.

The Wild out-shot the Sharks in the first period 10-8, though the Sharks had two plus power plays, including a two man advantage for 1:52. They had four shots in those combined power plays. The Sharks also had to kill one penalty, allowing one shot to Minnesota’s top-ranked power play. The Sharks did very well in the face-off circle, winning 74% of them.

The shot disparity continued in the second period, with the count at 14-6 Wild. There was a single penalty in the second, an illegal stick penalty to Kevin Labanc. Labanc lost his stick in a collision along the boards and Timo Meier pushed it back to him with his own stick. The move by Meier made it illegal for Labanc to use that stick. the Wild got credit for one shot on that power play.

The face-off contest went to Minnesota in the second, with the Wild winning 67% of them.

The Sharks scored at 3:08 of the third when Brent Burns’ shot went off of Dylan Gambrell in front of the net. It was Gambrell’s third of the year with Burns and Antti Suomela getting the assists.

The Sharks had one more penalty to kill in the third, and again they allowed just one shot on goal.

The Wild pulled Stalock from the net for the extra skater with 1:36 to go in the third. Melker Karlsson and Patrick Marleau had shots at the empty net but the Wild defense was there to prevent those goals. Karlsson and Barclay Goodrow had another chance, this time as a two-man breakaway. Goodrow gave the puck to Karlsson for the shot and Karlsson took it. Goodrow got the assist.

The third period face-off battle went to the Wild as they won 62% of them. The shot count was also in their favor 15-7. The lion’s share of the Sharks face-offs were taken by Joe Thornton (won 13 of 19) and Barclay Goodrow (won 9 of 22).

The Sharks will next play on Monday in San Jose against the Florida Panthers at 1:00 PM PT.