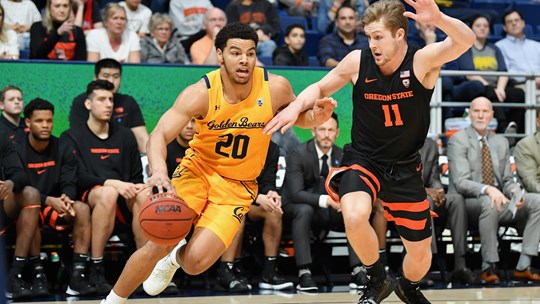 BERKELEY, CA–The youthful Cal Bears and their coaching staff didn’t know what to expect. After two, last place finishes in the Pac-12, a coaching change, and a roster with as many additions as departures, they knew they probally weren’t going to be great, and that they didn’t want to be last-place bad.

Whatever their destination, the Bears are starting to take control of the process, one game at a time.

“You just get addicted to the next game,” coach Mark Fox said after his Bears surprised Oregon State in the last game, making the winning plays late in a 69-67 victory at Haas Pavilion on Saturday.

Hardly on a last place trajectory, the Bears are finding ways to win (at home). Beating OSU evened Cal’s conference record at 4-4, good enough for a sixth-place tie with UCLA.

“To come out of the week with a couple victories for this group is progress,” Fox said. “But we’re just going to try to win this next one and see how many we can tally up.”

In winning four of seven–after losing six of seven–the Bears have improved dramatically at the defensive end while getting more varied contributions on the offensive end. Clearly an incremental process, all seven of Cal’s most recent victories are by seven points or less, the last three by 3, 2 and 2.

And what normally constitutes last minute heroics doesn’t apply at Cal: the Stanford game swung on a blocking foul and two made Paris Austin free throws. On Saturday, leading scorer Matt Bradley drew a charging call on Tres Tinkle with seven seconds remaining with the Beavers trying to grab the lead.

Looking for a critical basket or a momentum-changing dunk? There wasn’t one. Instead Cal turned a close game by limiting Oregon State to six points over the final 5:04. For the game, OSU shot 19 of 52, and missed 15 of their 20 3-point attempts.

For Cal, Bradley got it done by picking his spots, both on the floor and during junctures of the ballgame, scoring a team-best 23 points. Andre Kelly hurt OSU with his activity on the offensive glass, adding 14 points, six rebounds. Grant Anticevich contributed eight points and 11 rebounds.

Neither team created much separation as the game featured 11 ties and 13 lead changes. Tinkle spearheaded an 8-0 run for the Beavers to close the first half, but OSU didn’t sustain that surge with 32 percent shooting after the break.

Cal travels to No. 20 Colorado on Thursday looking to win their first true, road game after five losses.