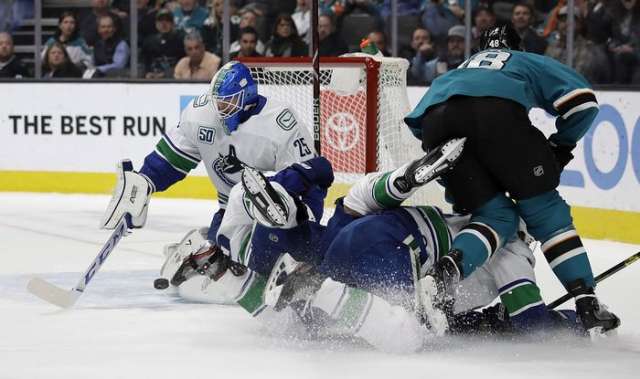 The San Jose Sharks suffered two losses Wednesday night against the Vancouver Canucks, first seeing Tomas Hertl exit the game in the 1st period with a lower body injury then following it up by losing a one-goal lead in the 3rd period to drop a 5-2 decision to the Canucks.

Hertl scored the first goal of the game before exiting with an injury and Brent Burns scored his 4th goal of the month but the Sharks ran into as tout Jacob Markstrom in net. The Canucks keeper made 38 saves to stifle the Sharks offense while the Canucks rallied to score 4 times in the 3rd period.

Hertl opened the game looking to build off his success at the All-Star Game in St. Louis where he scored 4 goals in one game and had the game-winner in the championship against the Atlantic Division. He took a pass from Timo Meier and wired it past Markstrom 4:15 into the game for a 1-0 Sharks lead.

He was using his skills as a power forward to create opportunities, but after a rush a few minutes after his goal Christopher Tanev didn’t ease up on pressure, lost his balance and pressed Hertl into the boards at an awkward angle.

Hertl lay on the ice briefly but skated off under his own power before heading down the tunnel to the Sharks locker room, ending his night after a little less than half a period.

The news after the game on Hertl didn’t sound positive. He has missed significant time with a right knee injury earlier in his young career and that area appeared to be close to the point of impact. If he is out for a prolonged period of time it may speed up the Sharks trade deadline plans with Logan Couture also still sidelined with an injury.

The early momentum for the Sharks seemed to slip away after Hertl exited the game and Quinn Hughes took advantage. His point shot worked its way through a crowd past Martin Jones 11:08 into the 1st to tie the game. Brent Burns gave the Sharks the lead 5:57 into the 2nd but Vancouver dominated the 3rd on the scoreboard.

Tyler Myers tied the game 2:36 into the period, then Marc-Edouard Vlasic took a double-minor for high-sticking 4:47 into the final period. The Sharks killed off the first penalty, but 16 seconds into the 2nd Jake Virtanen scored his 15th goal of the year. Brandon Sutter added one 59 seconds after the power play strike and Tanner Pearson scored the empty-netter for the Canucks. Markstrom turned aside all 12 third period shots for the win.

The road ahead doesn’t get easier for the Sharks who will hope to have Hertl back in the lineup Saturday. They face the red-hot Tampa Bay Lightning at home.