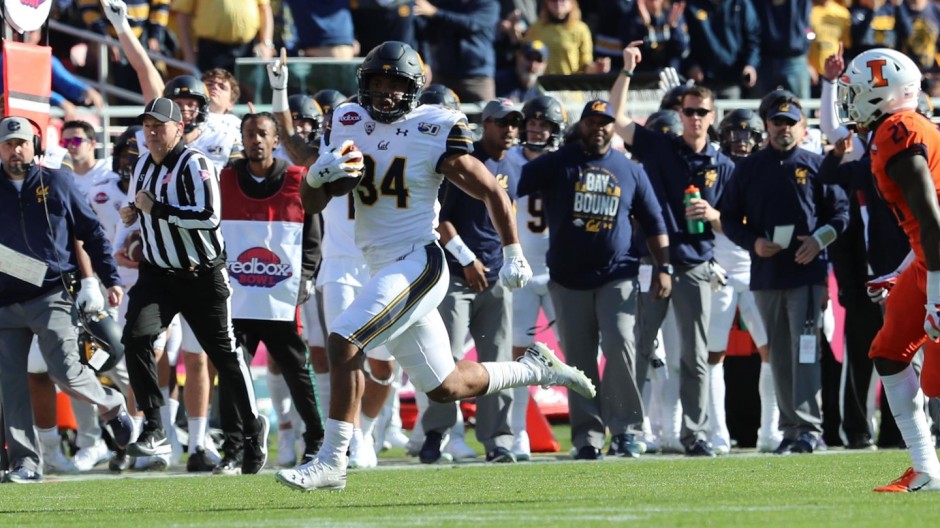 SANTA CLARA, CA–The Illini moved the ball, but the Bears moved the needle, making the majority of the big plays in their 35-20 Redbox Bowl victory over Illinois on Monday at Levi’s Stadium.

The Bears captured their first Bowl victory since the 2015 Armed Forces Bowl win over Air Force, and won eight games in a season for the first time in the last four seasons. Most importantly, they seized momentum heading into what should be a promising 2020 season.

“We talked in the locker room about the 2020 team,” coach Justin Wilcox said. “The expectations should continue to rise. There’s no reason why we can’t expect more of ourselves.”

Cal could return as many as 18 starters in 2020, 10 of those on offense. Chase Garbers previewed the upcoming season with an outstanding performance against Illinois, completing 21 of 31 for 272 yards and four scores, and a rushing touchdown as well. The Bears went as Garbers did in 2019, and the month-long break leading up to Monday’s contest allowed the redshirt sophomore to be healthy and effective, as the Cal offense kept the pressure on Illinois throughout.

Garbers was named the game’s offensive MVP, another honor for the quarterback who scored the winning touchdown in the final minute that broke Cal’s lengthy losing streak to Stanford.

“We knew there would be a lot of opportunities out there,” Garbers said. “The receivers did a great job running the right routes and catching the ball. I just had to put the ball where it’s supposed to be.”

The key play of the game may have come with 25 seconds remaining before halftime, and Cal clinging to a 14-10 lead. On the previous, third down play, Garbers was stuffed at the three-yard line, setting up a fourth down decision.

The Bears elected to go for it, passing on a field goal attempt that could have established a seven-point, halftime lead. Instead, Garbers found Christopher Brown Jr. on a swing pass that put Cal up 11.

All-American linebacker Evan Weaver finished the game with nine tackles, falling short in his bid to break the NCAA record for tackles in a season. Weaver finished with 182, short of Texas Tech’s Lawrence Flugence’s total of 193 established in 2002.

The Bears were outgained in total yards 450-395, but they came up with the big plays, like Zeandae Johnson’s sack and strip of quarterback Brandon Peters that ended Illinois’ initial possession of the second half.  Brown contributed Cal’s lengthiest gainer, a 54-yard run in the first half, but Cal’s scoring plays were all executed in the red zone. Garbers threw touchdown passes covering just 2, 3, 4 and 6 yards.

“Our offensive staff did a great job putting a game plan together and trying to dial it up,” said Wilcox, giving a respectful nod to outgoing offensive coordinator, Beau Baldwin and offensive line coach, Steve Greatwood, who announced his retirement in the days leading up to the game. Baldwin previously was announced as the new head coach at Cal Poly.

The Bears open the 2020 season in Las Vegas against UNLV on August 29 in Allegiant Stadium, the new home of the Raiders and the Rebels.