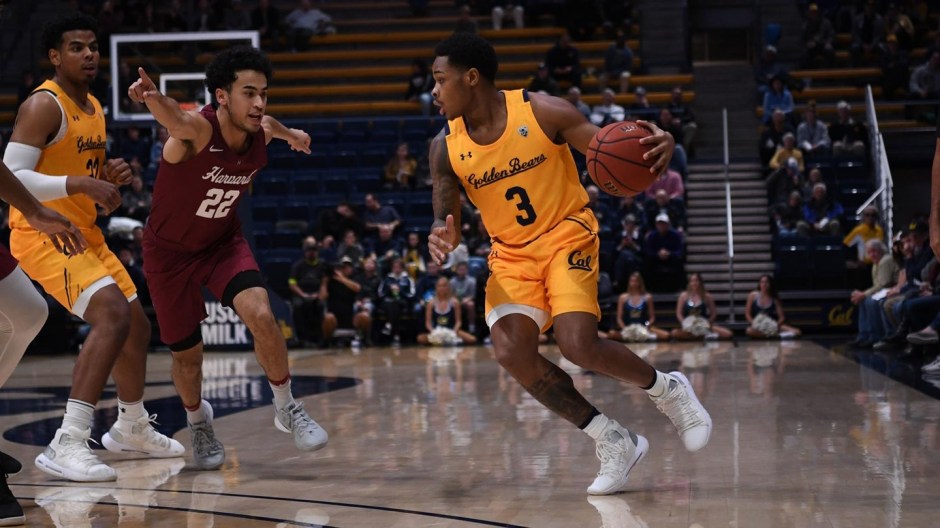 BERKELEY, CA–Harvard visited Haas Pavilion on Sunday. It wasn’t supposed to be the educational experience for the Bears it turned out to be.

Chris Lewis scored 19 points, Christian Juzang had 14 as the Crimson compensated for the absence of leading scorer Bryce Aiken with a strong defensive effort in beating the Cal Bears, 71-63.

Harvard held Cal to 37 percent shooting in the first half, 35 percent for the game and never trailed. The visitors from the Ivy League led by 15 at one point in the second half and were never really threatened. Cal’s one statistical advantage–a 13-3 edge on the offensive glass–was merely a mirage. Often Cal missed shots, rebounded and missed again.

Tommy Amaker, the former Duke star and Harvard’s head coach, loved what he saw from his team defensively.

“Our defense is our calling card for our program,” Amaker said. “We’ve built our program around our defense. Our guys give great effort. We play a lot of players so we should be pretty fresh out there. I would love for us to be able to do that on one end and be a little more efficient on the other end. That’s the goal. But certainly was pleased with the team defensive effort that we gave.”

If losing as a Power 5 to an Ivy League opponent wasn’t disconcerting enough, the Crimson did it in a very un-Ivy League manner. They blocked shots. Harvard turned back 11 Cal shots, seven by their starting posts, 6’8″ Mason Forbes and the 6’9″ Lewis.

Aiken, averaging a team-leading 16.7 ppg, was in a walking boot before the game. Amaker didn’t divulge many details regarding his injury, but he was a surprise scratch. Cal was unaware of Aiken’s unavailability until the opening tap.

The Bears have lost seven of nine after a 4-0 start, and now look to their Pac-12 opener at Stanford on Thursday with the conference’s only losing record (6-7) at this juncture. Eight of the 12 members have lost either twice or three times, including Stanford (11-2). Cal is trying to avoid a third, consecutive season in the Pac-12’s basement.

Defense has been a major issue with the Bears, and it was again Sunday. Harvard shot 57 percent before halftime to jump to 34-24 lead at the break. The offense was absence as mentioned, especially from leading scorer Matt Bradley, who missed 10 of his 14 shots, including all six of 3-point attempts.

“We don’t have a ton of guys who are consistent scorers and so the focus of the defense is going to be geared towards certainly Matt. And he’s going to have to really work to move without the ball, and learn to be more efficient,” head coach Mark Fox explained.

“He’s learning how to play the role of a lead role player, and he’s having to do that on the fly. And there’s a lot that comes with that.”

Harvard cut Cal off at the point of attack as well. Starting point guard Paris Austin and his backup Joel Brown were a combined 2 of 12 shooting, and compiled just five assists.

Cal opens Pac-12 play with three of their first five on the road with a trip to Los Angeles following a homestand against the Washington schools. Given the Bears’ desire to jump out of the conference basement, their conference home opener against the WSU Cougars is an opportunity not to be missed.

Why? When you’re struggling, you don’t run across too many, beatable opponents. That’s Cal’s reality at the moment.