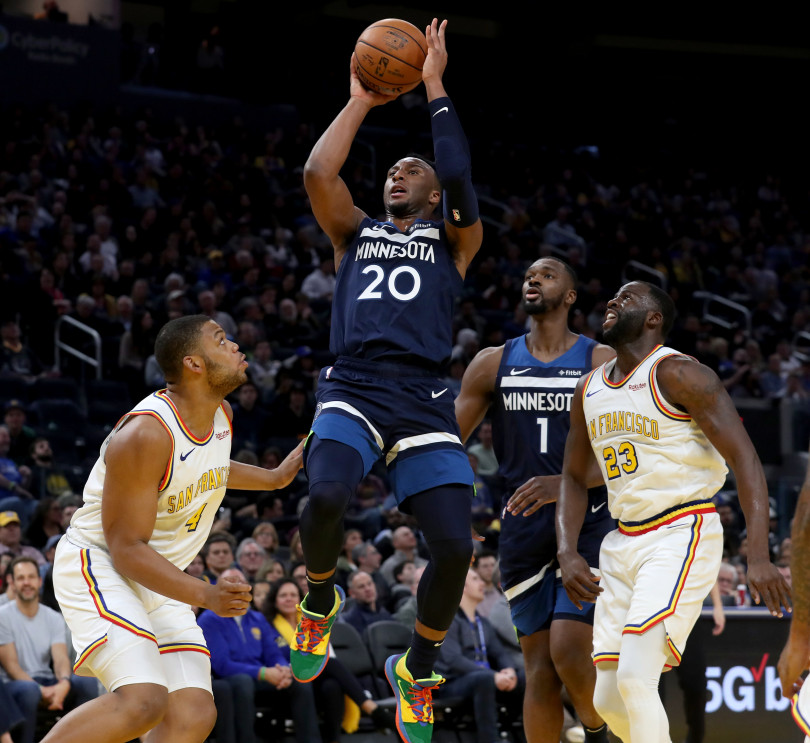 San Francisco- The Golden State Warriors won their second game in a row Monday night against the Minnesota Timberwolves 113-104. It was the first time this season that the Warriors have won two straight. The Timberwolves, who started the season 10-8, extended their losing streak to 11 games. Minnesota was without the services of the best player, Karl-Anthony Towns, due to an injury.

Both teams played a lousy first quarter. The score was tied 22-22 at the end of 12 minutes. The Warriors shot 28% from the floor while the Timberwolves were slightly better at 33%. Neither team played well.

The Timberwolves grabbed an early lead to start the second quarter. The Warriors were able to even the score at 31 and again at 35. It was at this point in the period when the Warriors got their act together to go on a 20-3 run to lead 55-38. The W’s finished the first half with 14-point lead 57-43. D’Angelo Russell led the team with 13, Alex Burks had 10, and Willie Cauley-Stein kicked in with 10, too. Andrew Wiggins and Jeff Teague led the T-Wolves attack with 12 and 10.

As basketball fans know, teams have to play for all 48 minutes if they hope to win. Even though a team has a big lead, they have to be careful to not let the other side get back into the game. The Warriors had lost several games as they let down in the final period. Minnesota gave them a tussle as the W’s started to make mistakes, and that let Minnesota get within six points. The Timberwolves went on a 16-5 run to make it 89-83. The Warriors made 8 turnovers in the quarter. The T-Wolves cashed in. The Warriors met the challenge as Russell, Burks, and Damion Lee all connected on threes to thwart the T-Wolves. The W’s built the lead back to 10 and held on to win 113-104.

Game Notes- The Warriors improved to 7-24 while Minnesota fell to 10-19. The Warriors’ Glenn Robinso III was out of action with a sprained ankle. The W’s recalled guard Ky Bowman from the G-League to take his spot on the roster.

The Warriors had four starters in double figures Monday night. D’Angelo Russell paced the team with 30 points, 4 rebounds, 4 assists, and he connected on 5 threes in 11 tries. Burks was second with 25 points and 8 assists. He made 2 threes. Damion Lee had 14  points, 7 boards, and 3 assists. He knocked down 3 threes. Willey Cauley-Stein had 12 points and 7 rebounds. Draymond Green’s line was 9 points, 14 rebounds, and 4 assists. Eric Paschall rerturned to action and tallied 8 points in 8 minutes of playing time.

The Warriors meet the Houston Rockets on Wednesday, Christmas Day, at the Chase Center. The game will start at 2 pm PT.