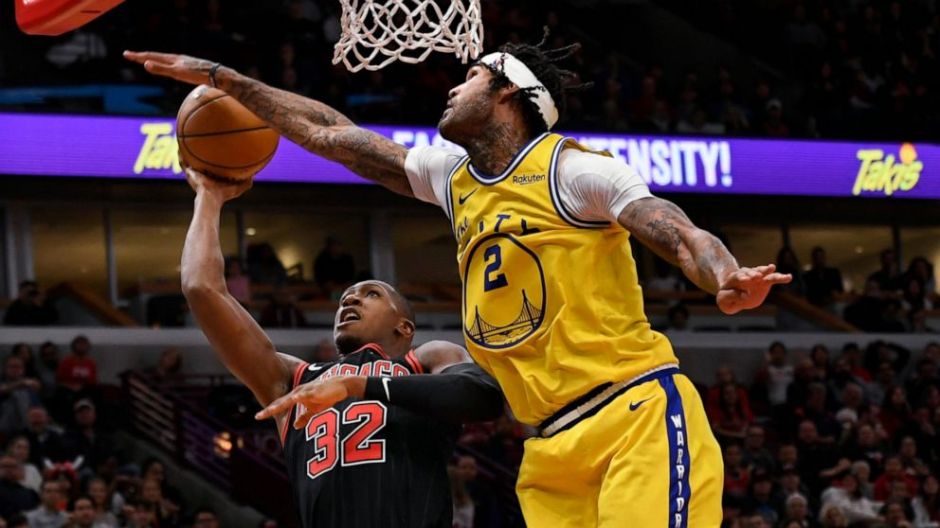 photo from abcnews.go.com: Chicago Bulls’ Kris Dunn (32) goes up for a shot against Golden State Warriors’ Willie Cauley-Stein (2) during the second half of an NBA basketball game Friday, Dec. 6, 2019, in Chicago. Golden State won 100-98.

The Golden State Warriors (5-19) faced the Chicago Bulls (8-15) away on Friday, Dec. 6, taking home a close win (100-98). There was almost no shortage of being on the edge of one’s seat; the game remained very neck-in-neck throughout.

Bulls’ Tomas Satoransky made the first basket of the game nearly a minute in. The Dubs took their first lead when D’Angelo Russell made a three-pointer a minute later, holding the lead until halfway through the first quarter when Kris Dunn made a three-pointer for the Bulls (assisted by Satoransky). The Bulls held the lead for the remainder of the quarter, leading the Warriors 28-23.

Almost two minutes into the second quarter, Eric Paschall gave the Dubs the lead again after making a free throw. For three minutes the scores would increase but end up tied again. At the end of the second, the Bulls had a one-point lead (51-50).

Only once in the third quarter did the Dubs have the lead (by one point), which lasted under 30 seconds. Halfway through, they trailed the Bulls by eight points (62-70) and by six at the end (77-83).

The Bulls still exceeded the Dubs for half of the final period and the score was tied four different times. Bulls’ Zach LaVine tied the score 98-98 with 1:18 remaining in the game, and Dubs’ Glenn Robinson III made the game-winning shot with 1:03 left. The final score was 100-98, Dubs.