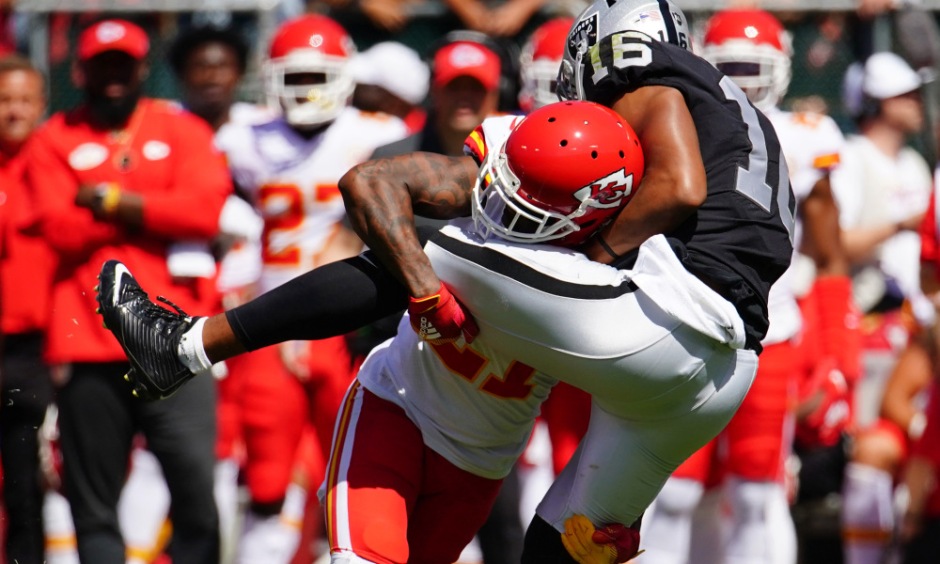 OAKLAND — The Raiders prepare for a big matchup in Week 13 as they will travel to Arrowhead Stadium to take on the Kansas City Chiefs in the second matchup this season between the two clubs, and 119th meeting all-time regular season. The Chiefs have won four straight games against the Raiders, who are trying to win in Kansas City for the first time since 2012.

Kickoff is set for 1:25 p.m. PT after being flexed into the afternoon slot from their original 10:00 a.m. PT start time on CBS. You know this is a big game as CBS sends its No. 1 broadcast team of Jim Nantz, Tony Romo and Tracy Wolfson on the call from Arrowhead Stadium.

In Week 12, the Raiders fell hard on their faces, losing on the road to the New York Jets, 34-3, at MetLife Stadium in East Rutherford, NJ to fall to 6-5 on the season. Oakland currently sits in second place in the AFC West, trailing the 7-4 Chiefs by one game.

The Jets’ No. 1 ranked defense against the run held Raiders rookie running back Josh Jacobs in check, holding Jacobs to just 36 total yards from scrimmage (34 rushing, 2 receiving) on the day. On the season, Jacobs has totaled 1,101 yards from scrimmage, good for the fourth-most scrimmage yards by a player in first 11 games of a season.

His 957 rushing yards this season ranks fifth in the NFL and third in the AFC and are the most among all rookie rushers.

Defensively for Oakland, rookie defensive end Maxx Crosby registered another sack, giving him 5.5 sacks in his last three games. With a team-leading 7.5 sacks this season, Crosby is tied for third-most among all rookies and are the most by a Raiders rookie since 1991, according to Elias Sports Bureau.

Crosby is one of two players (T.J. Watt) in the NFL who have recorded at least seven sacks to go along with three forced fumbles and three passes defensed.

Kansas City enters Week 13 after coming off their Bye Week following a 24-17 victory in an AFC West battle with the Los Angeles Chargers in Mexico City on Monday Night Football.

In Kansas City’s first matchup against Oakland in Week 2 at the Oakland-Alameda County Coliseum, the Raiders jumped out to a 10-0 lead in the first quarter before Chiefs quarterback Patrick Mahomes tossed four touchdowns in the second quarter alone to pace the Chiefs to a 28-10 win. Mahomes completed 30-of-44 passing for 443 yards, shredding the Raiders defense in the process.

Following the game, the Raiders will return home for their final two home games of the year against the Tennessee Titans and Jacksonville Jaguars. Tennessee (6-5) and Indianapolis (6-5) are logged-jammed with the Raiders in a battle for a wild card spot for the AFC playoffs.

Kansas City will head to New England to face the Patriots before returning home to take on the Denver Broncos in Week 15.