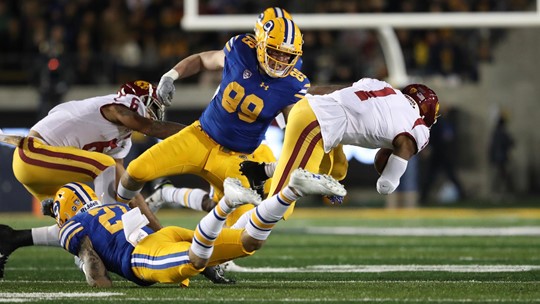 Freshman quarterback Kedon Slovis threw 406 yards and four touchdowns in a game that was tied 10-10 late in the second quarter, but quickly turned for the Trojans at that point.  Slovis connected with Michael Pittman Jr. for a 33-yard touchdown pass 43 seconds prior to halftime. Then on the opening drive of the second half Slovis hooked up with Drake London for an 8-yard score that made it 24-10.

That sequence highlighted the theme for the evening: Cal’s highly-regarded secondary was no match for the Trojans’ receivers and the crafty Slovis.

“Credit the wideouts,” USC coach Clay Helton said. “They did an elite job when they got in one-on-one situations, making big plays for the kid. When you have four touchdowns and zero interceptions, that’s a hell of a day.”

Slovis repeatedly bought time in and out of the pocket in order to make big plays downfield. London, Pittman and Amon-Ra St. Brown each had pass plays for 45 yards or more. USC would go on to reel off 31 consecutive points, turning the game into a rout.

“Our guys wanted to compete against them. I love that about them,” said head coach Justin Wilcox. “But you have to give them credit. The matchups are as tough as it’s been. I’ve seen great receivers in this league, but not a collection like that.”

While USC made highlight reel plays, the Bears struggled to keep their best players on the field. First, Christopher Brown was lost for the evening when USC’s Michael Rector delivered a vicious hit as the Bears were driving. Upon further review, Rector was hit with a targeting penalty and ejected from the game.

Chase Garbers returned to action after missing five games, and appeared sharp, as well as afforded snaps to ease into a competitive ballgame. But that scenario ended abruptly when the sophomore quarterback injured his shoulder in the second quarter and did not return.

Reserve inside linebacker Evan Tattersall was injured during a punt coverage play in which he was pushed backwards and suffered an apparent neck injury. Tattersall remained down on the field for several minutes and was taken to a local hospital. After the game, Wilcox reported that Tattersall had movement in all of his extremities and was expected to be released from the hospital.

On defense, senior safety Ashtyn Davis suffered a knee injury and did not finish the game.

The Bears have not defeated USC in Berkeley since 2003. They remain one win from Bowl eligibility with games remaining at Stanford and at UCLA.

The 122nd Big Game is up first next Saturday at 1pm.