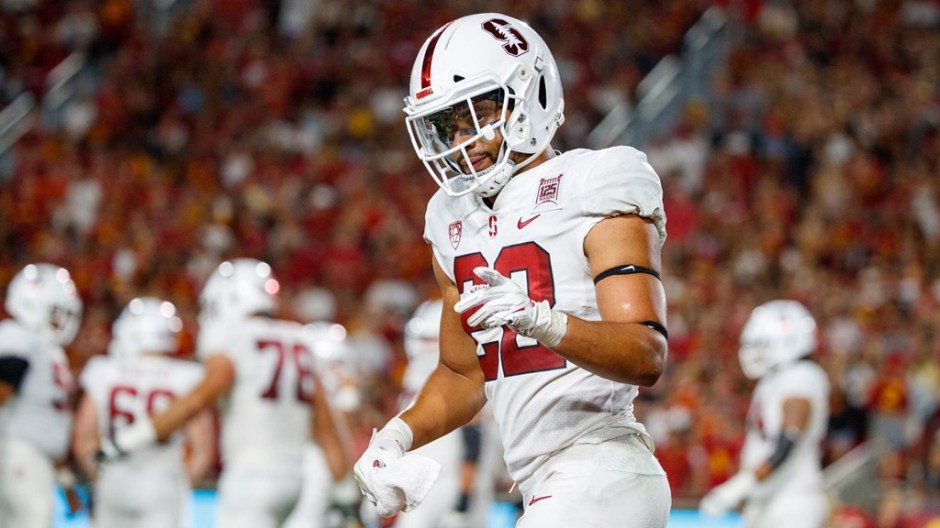 Backing up two of the most accomplished players in program history wasn’t easy for fifth-year senior and team captain Cameron Scarlett. Well, at least not for a guy who ran for nearly 2,500 yards and 30 touchdowns his last two seasons at Central Catholic High in Portland, Oregon.

“When I was behind Christian (McCaffrey) and Bryce (Love), I was just trying to absorb everything I could,” said Scarlett. “I knew they had this out-of-this-world talent and were going to have crazy years. My biggest thing was just trying to fit in where I could and make plays for the team.”

Scarlett became a short-yardage specialist and workhorse in the fourth quarter, helping preserve leads. Last year, he excelled on kickoff returns, his 1,008 return yards ranking first in the Pac-12 and second in the nation. Scarlett brought back 12 kicks for 30 or more yards — the top figure in the country — nearly breaking several.

“I was trying to return every kick for a touchdown knowing that I didn’t have that big of a role,” Scarlett said this week, as the Cardinal (1-1, 0-1 Pac-12) prepares for Saturday’s nationally-televised game against No. 17 UCF (2-0) in Orlando, Florida.

Through two games, Scarlett has rushed for a team-best 179 yards on 39 carries (4.6 average) and recorded a career-high 97 in the opener against Northwestern. Named to the Doak Walker Award watch list, he has 233 all-purpose yards, second-most on the team.

A two-time Pac-12 All-Academic selection who earned his degree in science, technology and society last June, Scarlett weighed his options after the 2018 season. His older brother Brennan came to Stanford from Cal in 2016 as a graduate transfer and now serves as a starting outside linebacker with the Houston Texans.

“There were some question marks,” said Scarlett. “It just came down to talking to my family and figuring out what was going to be best for my future. I still felt like I had a lot to prove here. I’ve had some ups and downs, but I’ve never had the opportunity to take over and be the guy. That was my goal when I came here.”

Once Scarlett made the decision to return, he was all in.

“I knew I was going to have to take on more of a leadership role,” Scarlett said. “The offense goes as the running backs go. I changed my mindset of leading by example and being more vocal. Being one of three fifth-year guys, I knew people were looking up to me.”

David Shaw, the Bradford M. Freeman Director of Football, has been impressed by Scarlett’s work ethic and mentoring with the younger running backs.

“Once he made the decision to come back, he’s pushed himself,” said Shaw. “He’s in phenomenal shape, he’s quicker than he’s ever been, he’s explosive, and he’s taking a lot of pride in it.”

Scarlett, however, is hardly satisfied.

“Just assuming that role as the No. 1 back has given me more confidence,” Scarlett said.

“I put more stress on myself to make plays. I’ve left a lot of yards out there and want to keep improving.”

“We look forward to him coming back full go,” Shaw said.

Freshman Walter Rouse will start for the second straight game in his absence.

“Walter played really well last week,” Shaw said of his showing against USC. “Not perfect, but really hard. He’s only going to grow and improve.”

Additionally, junior right tackle Foster Sarell is doubtful against UCF. Freshman offensive tackle Barrett Miller saw action against USC and is in the mix for Saturday.

The good news is that Stanford has depth on the offensive line and the roster includes five talented freshmen. Shaw won’t make any decisions on his starters until later in the week and will likely rotate players in the hot and humid conditions.

Promising sophomore inside linebackers Ricky Miezan and Jacob Mangum-Farrar are unlikely to play. Miezan is sidelined indefinitely and Magnum-Farrar is doubtful.

SERIES HISTORY: In the only previous meeting against UCF in 2015, Stanford rolled to a 31-7 home victory as Kevin Hogan passed for 341 yards and three touchdowns and McCaffrey had 166 all-purpose yards and scored on a pass reception. Love, a freshman, dazzled the home crowd with a 93-yard catch-and-run, a glimpse of things to come.

The last time we played in the state of Florida 🍊🏆#WallpaperWednesday | #GoStanford pic.twitter.com/aod9Ke7tmd

CHALLENGING CONDITIONS: The last time Stanford played in Florida was on Jan. 3, 2011, when they beat No. 12 Virginia Tech, 40-12 in the Orange Bowl in Miami. Saturday’s forecast calls for scattered thunderstorms and a high of 85 degrees and 73 percent humidity.

“There are a lot of variables,” said Shaw. “When they line up to play on Saturday, we want to make sure they are properly rested, have proper nutrition and are properly hydrated. And the guys have to buy in and be active participants.”

The team will bring 80 players — the same as a Pac-12 game — and departs Thursday. Stanford will conduct a light, non-contact workout on Friday at UCF’s indoor practice facility.

Given the climate, extra day of preparation and likelihood of rain, the training staff shipped an extra palette of Gatorade earlier this week. The equipment staff packed extra practice gear, rain gear and doubled the balls they usually take, bringing 24.

“You’re packing for a bowl game, but instead of a week it’s two days,” said equipment director Greg Valenzisi. “The biggest thing is if you don’t have it, you’re not going to get it.”

Extra staff will make the trip to distribute water.

SCOUTING THE KNIGHTS: “They’re very fast and very confident,” Shaw said of UCF. “They’re very aggressive and do a lot on the defensive side. A lot of different coverages and blitzes. This will be the quickest tempo team we’ve played in years. The biggest thing is you have to communicate quickly and get lined up.”

UCF’s no-huddle offense doesn’t give opponents a chance to substitute on defense.

“The guys who are out there have to stay out there,” said Shaw. “But we have to give different guys series’ so they can stay fresh and I think we’re deep enough to be able to do that.”

ELIMINATING ERRORS: Penalties have hampered the offense and Shaw expects the group to reduce them going forward, especially up front.

“Always harping on that,” Shaw said. “We want to go the whole game without saying their names. That’s something we have addressed many times and will continue to address because we don’t want penalties erasing big plays.”

NOTES: Under Shaw, Stanford is 20-6 coming off a loss … The Cardinal has forced five turnovers in two games and ranks No. 14 nationally … Brock Jones has made two tackles on special teams … The coaching staff will take advantage of the trip to watch potential recruits and visit with counselors in Florida, Georgia and other regions on Friday … Stanford will host Oregon at 4 p.m. PT next Saturday on ESPN. It will mark the fourth contest played before the autumn quarter starts on Sept. 23. Game themes include Hall of Fame Recognition, Set the Expectation and New Student Orientation.

QUOTE: “We have to try and find a way to raise our level of expectations in all three phases against a team that doesn’t give games away.” — David Shaw