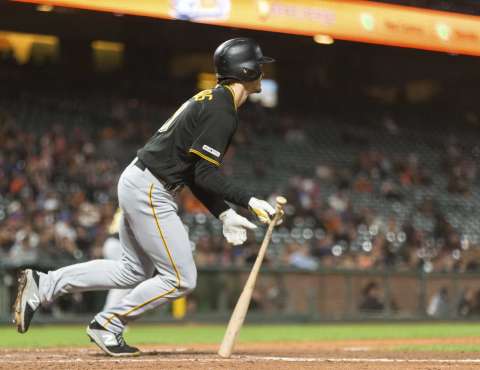 SAN FRANCISCO — Kevin Newman maybe auditioning for a role as the Pirates’ leadoff man, but he maybe better suited as the team’s focal point.

Newman knocked in a pair of runs in a four-run ninth inning and the Pirates shocked the Giants 6-4 on Monday night. The Pirates improved to 11-5 in the games the speedy, powerful Newman has batted leadoff.

The Giants started Madison Bumgarner, who was attempting to win for the 61st time at Oracle Park, surpassing former teammate Matt Cain as the winningest pitcher in the park’s history. Bumgarner was in line for the win after allowing two runs and six hits in seven innings, but the Giants’ injury-ravaged bullpen let him down.

With relievers Reyes Moronta, Tony Watson and closer Will Smith unavailable due to injuries, manager Bruce Bochy stuck with Tyler Rogers, who pitched a scoreless eighth inning. But Rogers allowed Kevin Kramer to reach on an infield single, and was replaced by Fernando Abad after just one pitch in the inning.

Abad walked Josh Bell, and gave up Elias Diaz’ lengthy drive to the left field gap that one-hopped the wall. But the smash registered as just a base hit when Mike Yasztremski fielded the ball cleanly and appeared to have a catch to the Pirates’ baserunners. Both Kramer and Bell retreated as Diaz advanced almost creating an out-making logjam on the basepaths, but the Pirates were still set up with bases loaded and Newman up.

Newman delivered to tie it, the first time the Pirates had been even since the fifth inning. Kevin Reynolds’ base hit untied it, and Jose Osuna provided insurance with his sacrifice fly that scored Newman.

“Too bad we couldn’t hold on to give him a win,” Bochy said of Bumgarner, his strong outing squandered.  “You look at his body of work; he’s been a savior. Guys who give you innings like that are invaluable. Not just innings but quality innings.”

The Giants fell to 30-39 at home–the third worst record in the National League–after losing for the sixth time in their last seven home games. Meanwhile, the youth-infused Pirates have won 11 of 17 after being dreadful for almost all of July and August.

Newman and Reynolds, the former Giants minor leaguer acquired in the Andrew McCutchen deal, have been a big part of the recent surge.

“I think the combination of the two has them getting the results they’ve been getting,” said manager Clint Hurdle.