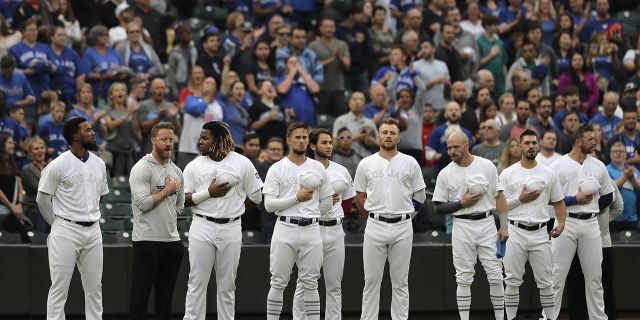 #1 How bad were the weekend uniforms, some said the home whites looked like they were cricket players or they were selling ice cream in the stands like the concession salespeople. MLB said and made sure each player wore the proper uniform.

#2 The helmet issue of Oakland Raiders’ Antonio Brown has not yet gone away yet. Brown filed a grievance with the Players Union. Brown said the helmet that he used to use in Pittsburgh was a good-fitting helmet that did its job. The league is saying Brown needs to wear the proper helmet to protect himself from concussion and if he collides with another player.

#3 The Raiders picked up a close win in Winnipeg against the Green Bay Packers 22-21 last Thursday. It took a Daniel Carlson field goal with eight seconds left to get the Raiders the win on a rugged short field that’s normally used for Canadian Football.

#4 The A’s will try and shake off the double loss to the Giants from the weekend series and tango with the Kansas City Royals. The A’s really need this series in order to keep pace with Cleveland and Tampa Bay in the AL wild card.

#5 It’s hard to believe that former San Francisco Giant pitcher Juan Marichal is 81 years old. He’s had a storied career, most notably when he got into that ruckus with John Roseboro and the Los Angeles Dodgers in 1965 in a brawl that Marichal hit Roseboro on the head with a bat. Marichal is also noted for his high leg kick and his multiple 20-win games.

Amaury Pi-Gonzalez is the radio voice for the Oakland A’s Spanish radio on 1010 KIQI, is the vice president of the Major League Baseball Heritage Museum and does News and Commentary each week at http://www.sportsradioservice.com