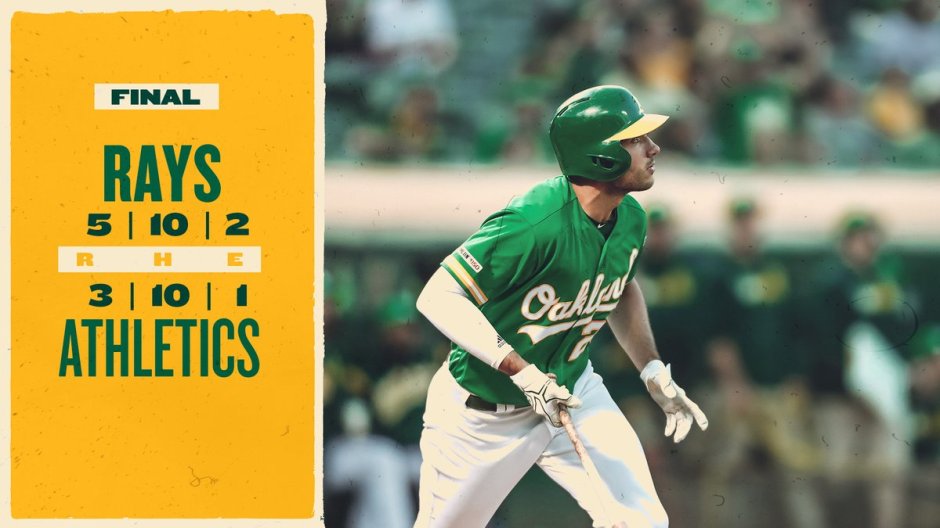 OAKLAND — After the shock of Frankie Montas’s suspension, the A’s had the arduous task of dealing with the Tampa Bay Rays, a difficult opponent in spite of their recent downward spiral, in which they’ve lost their last four games and eight of their last 10. After all, going into tonight´s fray at 43-32, they’ve had the third best won-lost record in the American League, trailing only the Yankees and Astros.

We are officially in the (very good) dog days of summer https://t.co/PRcUCECAEC

The green and gold mounted a threat against Tampa Bay’s opener, the right-hander throwing Andrew Kittridge (0-0,5.40) when Khris Davis’ two out single to center sent Matt Chapman, who had walked, to third. But Ramón Laureano, who had struck out in all four of his plate appearances in Thursday’s epic battle, went down swinging to end the inning.

Anderson held Tampa Bay at bay through the second, striking out two more Rays in the process, but faltered significantly in the third frame. The A’s hurler walked weak hitting (.093) Joey Wendle on four pitches to open the inning. After Guillermo Heredia forced Wendle out at second with a slow grounder to Chapman, Brandon Lowe slammed a double off the center field wall that plated Heredia. While this was going on, Laureano’s bobble allowed Lowe to advance to third. He scored on a passed ball, while Austin Meadows was at bat. A nifty play by Chapman on a grouder by Travis d’Arnaud staunched the flow.

Meanwhile, Kitterage completed his allotted two innings and left after throwing 39 pitches and allowing two hits and one walk against three strikeouts. Southpaw Jalen Beeks (5-0, 2.73 ERA) followed Kitterage and had no trouble with the first two A’s batters he faced. But Matt Olson slammed a 2-2 delivery over the center field fence for his 12th home run of the season to narrow the gap to 2-1.

The Rays immediately widened that gap. Kevin Kiermaier opened the fourth with a ground ball that Anderson couldn’t handle and which went for a single. Kiermaier moved up a base on Willie Adames’s single to right and moved on to third when Wendle’s grounder to Semien forced Adames at second. Kiermaier scored when Heredia’s ground ball to Profar, in turn, forced Wendle at second.

Laureano blasted a 1-0 curve ball to open the home fourth with his twelfth home run of the season, this one coming on a fly to left. The A’s now trailed 3-2. That comeback fizzled out when Phegley hit into a double play, second unassisted to first, with Profar and Pinder on base.

Anderson’s laborious tenure on the mound ended at the close of the fourth. He had thrown 79 pitches, 49 for strikes and yielded three runs (all earned), seven hits, and three walks, striking out four. His replacement was left-hander Wei-Chung Wang.

Two round trippers in two innings was enough to convince manager Keven Cash to remove Beeks and replace him with righty Austin Pruitt at the start of the bottom of the fifth.

The next long ballgame came off the bat of Willie Adames, who lifted an 0-1 pitch out of play to put the Rays up 4-2 in the sixth.

It looked as if the A’s would shave a run off Tampa Bay’s lead in the bottom of the sixth when, with Khris Davis on first with a single, Profar sliced a two bagger into left. Davis had a good shot at scoring but was cut down, left fielder Phan to shortstop Adames to catcher d’Arnaud. The A’s requested a video review, but that showed that there had been no illegal blocking of home and that Davis was well and truly out.

Adames’ fourth bagger was the only hit off Wang in his three innings of work. He was replaced by Joakim Soria to start the eighth. The veteran still had enough gas in his tank to retire the side, one, two, three, on two strikeouts and an unassisted put out when the pitcher fielded Kiermaier’s bouncer and outraced the center fielder to tag him out on the way to first.

Chapman’s first pitch lead-off double to left center sent Pruitt to the showers in the bottom of the eighth. The tactic of bringing in a left-handed pitcher to face a left handed batter backfired when Olson drove a hard liner into right field for a run producing double that once more narrowed Tampa Bay’s lead to a single run. Cash immediately removed his southpaw so that right handed Chaz Roe could face right handed Khris Davis. The tactic worked against Davis, who grounded to short, Olson diving back to second. It worked against Laureano, too, who took a two-seam fastball for a called strike three. This brought in Oliver Drake to face switch-hitting Profar, who batted from the left side, his weak one. Of course, he would have batted from that side against Roe as well. Profar bounced out to short, and the A’s went into the ninth trailing 4-3.

Lou Trivino, who has been in a terrible slump, his win on Thursday notwithstanding, started off the ninth on the mound for Oakland. Adames started it off for Tampa Bay with a hard single to right and advanced to second on a wild pitch to Wendle, the next batter. Wendel’s bouncer to Profar’s left moved Adames up another base and resulted in the first out. With the infield drawn in, Trivino struck out Heredia, which allowed the infielders to move back into their normal positions. Trivino got a 1-2 count on Lowe, who drove a fly into deep right center field at the State Farm-Kaiser Permanente-DeWalt sign. Piscotty leaped, but couldn’t come down with the ball. Tampa Bay was up by two again, 5-3. Trivino got Phan to fly out to Laureano a bit to the left and a bit shorter, in front of the warning track at the Xfinity sign.

Once again the A’s entered the bottom of the ninth with their backs, like Piscotty’s in the top of the frame, against the wall. It so happened that Piscotty led off the innning for Oakland. He almost hit a double, but his 1-2 liner to left curved foul. He worked the count to three and two before Drake walked him. This brought up Robbie Grossman, who had pinch hit unsuccessfully for Pinder in the seventh. Drake struck him out swinging before giving way to Emilio Pagán, who faced Mark Canha, pinch hitting for Phegley. On the first pitch, Canha broke his bat producing a weak grounder that Pagán handled well and tossed to Choi for the second out as Piscotty moved to second. Semien then grounded out to the second baseman Lowe, playing in a shift to the left of the bag to end the game.

The win went to Pruitt, now 1-0, the loss to Anderson, 0-2, and the save to Pagán, his fourth in six opportunities.

Tomorrow’s game is scheduled to start at 1:07 pm. Oakland will send Mike Fierrs to the mound and Tampa Bay will call on the man who seems to be their favorite opener.