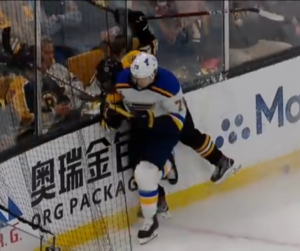 missourinet.com photo: The St. Louis Blues’ Oskar Sundqvist puts the hit on the Boston Bruins’ Matt Grzelcyk in Game 2 in Boston, resulting in a one-game suspension for Sundqvist.

On the NHL Stanley Cup Finals podcast with Matt:

#1 Matt talks about St. Louis Blues forward Oskar Sundqvist, who was suspended for a game for his elbowing the Boston Bruins’ Matt Grzelcyk.

#2 Was the suspension of Sundqvist justifiable and with Sundqvist out of the lineup. how much of impact is that for the Blues?

#3 Blues captain David Backes said that at this rate if this keep up there won’t be any defensemen left. “It’s from behind, elevated, into his head, into the glass. If that’s a two-minute penalty, I think there’s going to be a shortage of defensemen in this series by the end of it. That’s in somebody else’s hands. That’s something I think if I’m making that hit, I’m probably watching from the bleachers for a few.” said Backes.

#4 Will the Bruins come out in Game 3 fired up because of the hit on Grzelcyk or will they be satisfied with the league decision to suspend Sundqvist?

Join Matt for more coverage of the Stanley Cup Finals next Saturday at http://www.sportsradioservice.com