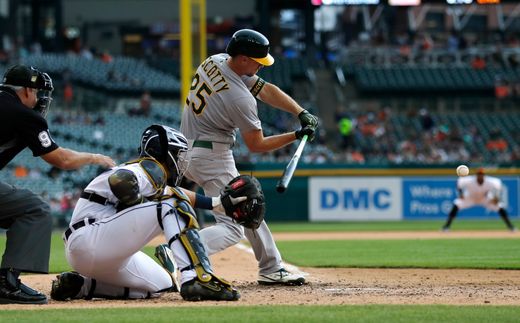 Gamesmanship courtesy of the groundskeepers? If you’re the Detroit Tigers trying to avoid an embarrassing, franchise record 16th consecutive loss to the Oakland A’s, why not?

With a light rain falling–and the A’s sporting a 5-3 lead in the bottom of the seventh–home plate umpire Tim Timmons stopped Sunday’s series finale with Liam Hendricks facing Josh Harrison leading off.

The timing of Timmons’ decision surprised both teams. It turns out the heavy rain that normally would force suspension of play wouldn’t arrive until ten minutes later. Since the A’s broke a 3-3 tie with two runs in top of the inning, the Tigers had to be afforded an opportunity to bat in their half of the seventh. Instead of declaring a rain-shortened 5-3 A’s win after the 101 minute rain delay that would follow, the teams are required to resume play September 6 in Oakland.

“We could’ve scored three runs real quick and not have to make it up,” said an optimistic Harrison. “It wasn’t the first time I had the game stopped in the middle of an at-bat, but it was due to it actually raining, not because of the threat of rain.”

“I was inside when it started raining,” said A’s starting pitcher Mike Fiers, who was lifted after the sixth. “I wasn’t out there to judge what was going on. The weather guys, I guess they saw something coming on the radar, so they stopped it.”

And the mysterious conversation between Timmons, the rest of the umpiring crew and the Comerica Park groundskeepers before the start of the seventh? It will remain a mystery, but could the groundskeepers have embellished the nature of the impending storm, influencing Timmons to go with the abrupt stoppage prior to a 2-0 pitch from Hendricks to Harrison?

Who knows? But the timing of the stoppage kept the Tigers current losing streak at six, and–at least for now–prevented the four-game sweep at the hands of the A’s.

“(The umpires) were told that once it started raining, it was going to rain really hard. If they have orders to do that, I get it. I’m not a weather man, either, just wasn’t raining very hard,” said A’s manager Bob Melvin.

The A’s continue their road swing in Cleveland on Monday. Brett Anderson will face the Indians’ Carlos Carrasco in the 4:05 pm start.