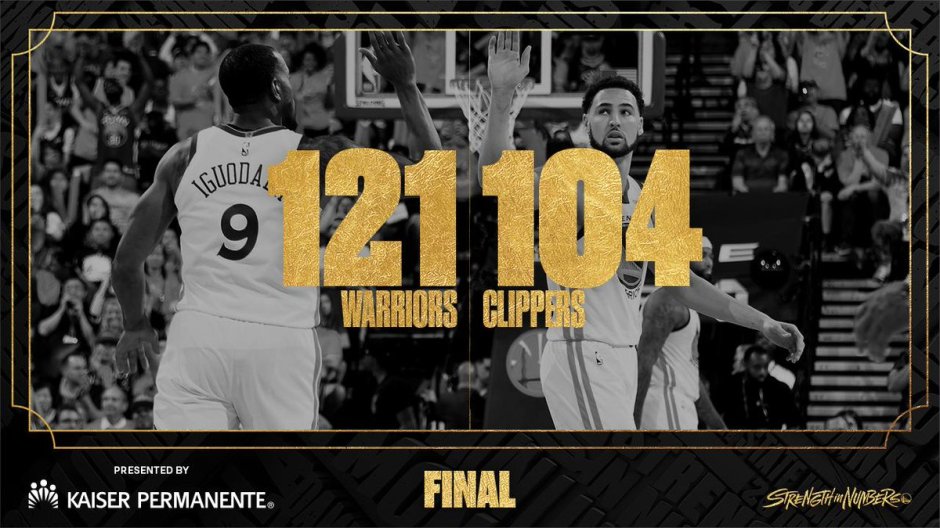 The Golden State Warriors and Los Angeles Clippers kicked off their first-round series. Game 1 was at Oracle Arena on Saturday night.

The Oracle was Roaracle due to the loud cheers and chants from Dub Nation. The game went underway and Cousins scored the first bucket of the NBA playoffs at the 10:45 mark of the first quarter after trailing 3-0 at first. Durant dropped back-to-back dimes with 8:45 left in the first. Cousins continued shooting his shots and then Green contributed his shots. Green was a perfect 5-5 in field goals. The Warriors led 36-27 at the end of the first.

The Warriors turned offense into art in the second quarter. Curry played beautiful basketball. Durant scored a bucket, and with that bucket, Durant (3,665) passed Dirk Nowitzki (3,663) for 15th place on the NBA all-time career playoffs points scored list. Check out the bucket below.

With this bucket, KD passes Dirk for 15th most career points in #NBAPlayoffs history!

Andre Iguodala threw it down late in the second, and the Warriors took a 69-56 lead to the locker room at halftime.
The Warriors gave a shoutout to Kaiser Permamente for providing Dub Nation with customized Gold and Royal Blue playoff shirts.

The Warriors returned to action in the third quarter. Curry got the crowd pumping with his three-pointers, some of which were long distance threes. Aside from Curry, who passed Ray Allen for most career threes, the Warriors turned defense into offense as Iguodala forced a turnover and threw down a dunk that could’ve broke the rim.

Curry proceeded to shoot threes in the fourth quarter, and the Warriors blew out the Clippers 121-104 for a 1-0 series lead. The Clippers are down 0-1.

The Warriors and Clippers face off in Game 2 on Monday night at 7:30 pm PT. The game will be broadcast on NSBA, TNT and FSPT.