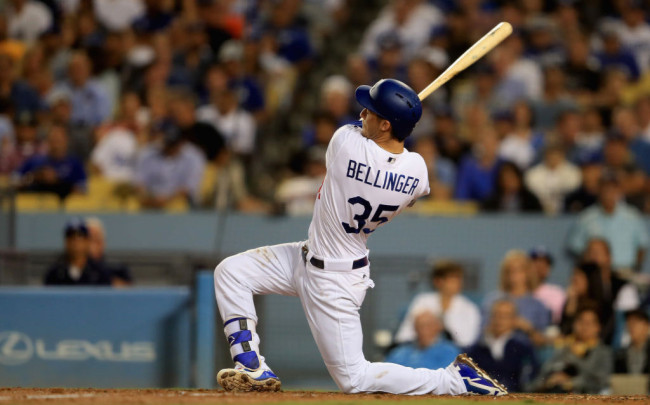 With a chance to possibly tie up the game, Pablo Sandoval ended the game with one swing of the bat.

Cody Bellinger hit a towering grand slam in the bottom of the third inning, as the Los Angeles Dodgers hung on to defeat the San Francisco Giants 6-5 at Dodger Stadium.

Madison Bumgarner committed a throwing error on a Russell Martin come backer that Brandon Belt was unable to dig out.

Bumgarner then walked Hyun-Jin Ryu on four pitches, and then Enrique Hernandez singled in Martin and then Bumgarner regrouped to get Justin Turner and Corey Seager; however, Bumgarner then gave up a single to A.J. Pollock and then Bellinger launched a Bumgarner offering over the center-field wall to give the Dodgers a 5-0 lead.

Ryu was cruising along until he gave up a single to Gerardo Parra in the top of the sixth inning and then Bumgarner hit his first home run of the season, a two-run blast into the left field bleachers.

Despite allowing the home run to Bumgarner, Ryu went seven innings, allowing two runs on six hits, not allowing a walk and striking out five, as he won for the second time in as many starts on the season.

It was the 18th career home run for Bumgarner, tying him for 20th place all-time for home runs by a pitcher.

Those five runs allowed by Bumgarner were unearned, as he went six innings, allowing five hits, walking two and striking out four; however, he saw his record fall to 0-2 on the season.

Turner gave the Dodgers what proved to be the deciding run in the bottom of the seventh, as he hit a sacrifice fly that scored Martin, who doubled to lead off the inning and went to third on a throwing error by Steven Duggar on a pinch-hit single by Alex Verdugo.

Things began to get interesting in the top of the ninth inning, as Evan Longoria doubled to lead off the inning against Yimi Garcia, then Buster Posey walked and that would be the end of the night for Garcia, as closer Kenley Jansen came on to face Brandon Crawford, who reached on a throwing error by Jansen that loaded the bases with nobody out.

Jansen then walked Yangervis Solarte to narrow the Dodgers lead down to 6-3, and then after Joe Panik struck out for the first out of the inning, Parra hit a two-run single to cut the lead down to 6-5 and put the tying run on third base.

Unfortunately, Sandoval grounded into a double play to end the game and even up the three-game series.

NOTES: Kevin Pillar was acquired by the Giants from the Toronto Blue Jays in exchange for Alen Hanson, Derek Law and Juan De Paula.

Pillar, 30, spent the first seven seasons with the Blue Jays. This season, Pillar is 1-for-16 in his first five games this season.

To make room for Pillar on the roster, the Giants designated outfielder Michael Reed for assignment.

Pillar, who grew up in the Los Angeles suburb of West Hills in the San Fernando Valley struck out in the top of the eighth inning.