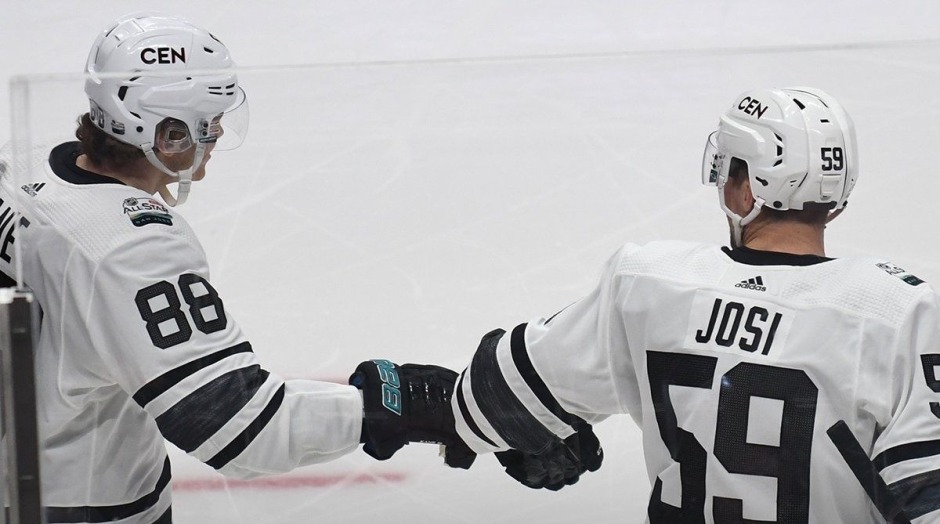 The All-Star Game was broken into three parts, two Conference contests and a third between winners of those. The games were made up of two ten minute periods of three on three play.

The Central Division scored first, with goals from Colorado’s Mikko Rantanen and Gabriel Landeskog against Anaheim’s John Gibson. Both were assisted by St. Louis’s Ryan O’Reilly.

San Jose’s Erik Karlsson got one back for the Pacific Division at 4:51 in a breakaway against Nashville’s Pekka Rinne. John Gibson got an assist on that one.

A fifth goal came from Winnipeg’s Mark Scheifele, assisted by O’Reilly. Gibson gave up a sixth goal to Rantanen, his second of the game. Patrick Kane also got a second goal, the Central’s 7th. That was 8:11 into the first period.

For the second period, the teams changed ends and goaltenders. Las Vegas goalie Marc-Andre Fleury took over for the Pacific Division and Minnesota’s Devan Dubnyk took the Central Division net.

Colorado’s Landeskog scored a second goal to start the second half, less than a minute into the period. He was assisted by Roman Josi. Fleury made a number of valiant saves before Ryan O’Reilly took the puck away from Brent Burns in the neutral zone. Fleury came way out of his net as if to steal the puck. He did not and O’Reilly went around him to score.

Yet another Central goal came from Landeskog, his third with about five and a half minutes left. Winnipeg’s Blake Wheeler got an assist.

The Central Division squad went on to the second round.