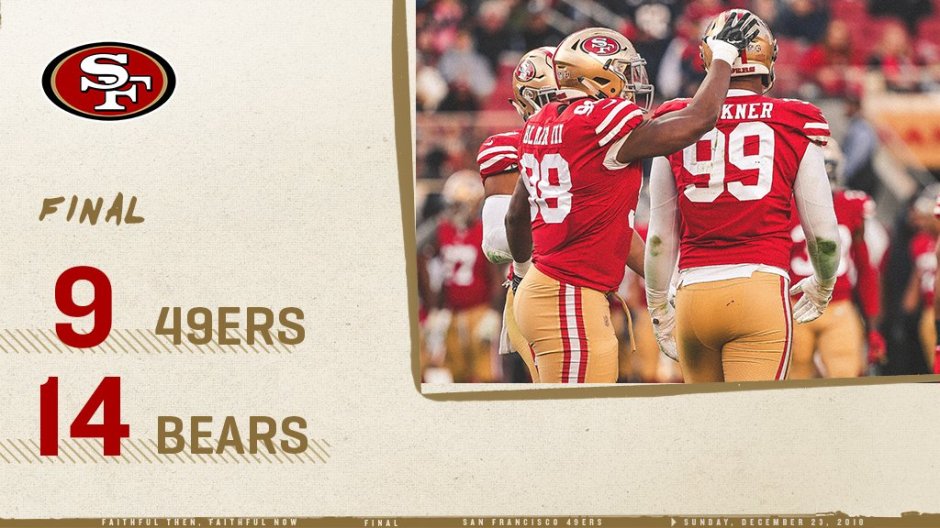 SANTA CLARA, Calif. — The San Francisco 49ers will finish their 2018 home record at 4-4 this year, as they dropped the home finale 14-9 to the Chicago Bears at Levi’s Stadium Sunday. The Bears remain hopeful for a first-round bye with the must-win victory.

Inability to score in the red zone and a few late mistakes cost the 49ers from upsetting the NFC North champs. San Francisco finished 0-for-3 in the red zone, as Robbie Gould scored all nine points with field goals inside the 30-yard line.

Nick Mullens made two costly errors down the stretch that prevented them from taking a late lead. With under eight minutes to go and marching, he threw a pick at the 14-yard line. After being lead a little too much, it tipped off the hands of Marquise Goodwin and right to Bears’ linebacker, Danny Trevathan.

Despite the pick, San Francisco won the turnover battle against the top team in the NFL, forcing two fumbles. DeForest Buckner recovered the first and Greg Mabin recovered one with 1:52 left giving San Francisco one final chance.

The 49ers recovered at their own 24 and began to move past midfield to the Chicago 45. After two consecutive incomplete passes, SF faced a fourth-and-four. Mullens was given great protection by the line and scrambled out to his right. With nothing but open field in front of him and enough room to easily pick up a first down, he went for the home run ball and threw it a few yards out of bounds.

Mullens admitted to his mistake, while Shanahan said, “he was just trying to make a big play.”

The attempt at the big play ended the drive and gave the Bears the win.

Mullens finished the day 22-of-38 for 241 yards. His primary target was George Kittle, catching seven passes for 74 yards. Kittle stands three receptions shy of the franchise record for tight end receptions in a season.

The 49ers continued to battle and lost as a brotherhood. Richard Sherman was ejected with under six minutes remaining after a fight broke out following a late hit on Mitch Trubisky near the Bears’ bench. Shanahan, Mullens, and George Kittle all appreciated the actions of sticking up for your teammates.

It remains to be seen if Sherman will be eligible for next week’s season finale in LA. The Rams can clinch the first-round bye with a victory, giving the 49ers a final chance at spoiler.