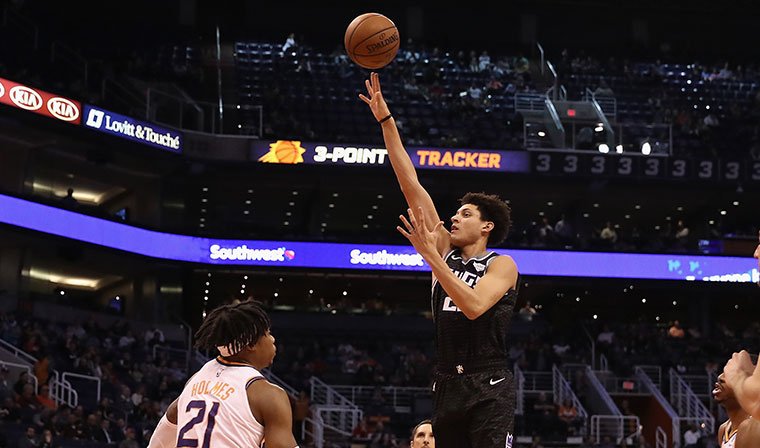 The Sacramento Kings were looking to make it two wins in a row on Tuesday evening against the Phoenix Suns at the Talking Stick Resort Arena. And win they did.

The Kings’ starters featured De’Aaron Fox, Buddy Hield, Iman Shumpert, Nemanja Bjelica and Willie Cauley-Stein. Prior to the game, Shumpert talked about his routine on and off the court. Shumpert told the local media: “I like being able to show that you can do more than one thing and do it at a high level.”

The Kings surprised the crowd and most, if not all, of basketball Twitter as they seriously took an early lead and never looked back. The Kings led the Suns 36-9 at the end of the first quarter.

Then, the Kings put the game out of reach with a whopping 40-9 lead over the Suns with 9:48 left in the second quarter. There were a few plays that were impeccable like Bogdan Bogdanovic’s flashy pass and Kosta Koufos’ signature floater. The Kings brought a 68-40 lead to the locker room at halftime.

The Suns’ Twitter account sent a tweet to the Kings early in the second half. The Suns tweeted: “You’re literally playing your OWN game right now. Focus on that.” Of course, the Kings retweeted it and wrote a comment that said “We are.”

“Can’t stop, won’t stop” was the perfect phrase to describe the Kings in the third and fourth quarters, respectively. Fox showed numerous highlight reel moments like he was some sort of God. There were a lot for us to choose from, but check out this noteworthy moment in the embedded tweet below.

Always trust in the Shammgod

The Kings held a comfortable 99-67 lead over the Suns at the end of three quarters.

Aside from Fox’s dominance, it’s worth noting that Harry Giles III made a 4-point hook shot with less than nine minutes in the fourth. The crowd was amazed and so were we.

And, if you’re a Kings fan, you were extremely happy. Oh and don’t forget that if someone asks you a question along the lines of “You’re still a Kings fan after all these years?” just shrug and give him or her a funny look like you don’t want to be bothered right now.