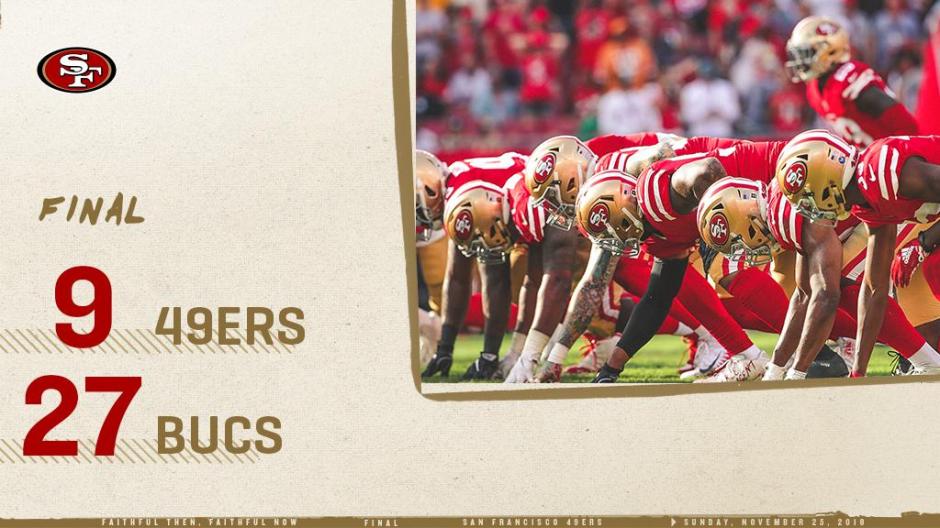 Sunday marked the most incompetent game of the season for the San Francisco 49ers as they lost their fifth straight road game 27-9 to the Tampa Bay Buccaneers. The 49ers now stand at 2-9, clinching their fourth straight losing season, with five games remaining. The poor outing coming off of the bye week wasn’t the story though.

Before the game Sunday, general manager John Lynch announced Linebacker, Rueben Foster has been cut. The announcement occurred all while Foster was still in a Tampa jail following an arrest Saturday night for domestic battery after an incident at the team hotel.

The 49ers clearly showed their zero-tolerance policy with Foster with the separation. In the off-season, Foster saw legal trouble and was arrested for domestic battery at a home in Los Gatos. After a long legal battle, the charges were eventually dropped after the accuser admitted in court she lied to ruin Foster’s career.

At that time, the 49ers made Foster promise it was the last time and to cut ties with the accuser. But on Saturday night, it appears she may have returned. According to The Athletic and the Tampa police, the party involved had a tumultuous on and off relationship with Foster.

She wanted to press charges after she claimed to have had her phone slapped out of her hand. The Tampa police also revealed she had a one-inch scratch on her collarbone.

Foster, a 2017 first-round pick, has been released on $2,000 bail. His NFL career is now in jeopardy as he faces up to a year in prison if he’s found guilty of the charge set forth.

Regardless of his guilt, the release was going to be inevitable because of the promise he broke with Lynch and the 49ers. Lynch later admitted that this was a team decision to help shape culture.

The San Francisco Chronicle reported on Sunday a second incident occurred in October between Foster and the victim. The 49ers were unaware of the October incident at the time of release.

The result of Sunday’s contest may be caused by Foster’s situation, or maybe the team finally has quit on the year. Regardless, Sunday’s contest may be the worst following a bye week in franchise history. The 49ers were awful from the start of the game. Unable to do anything, struggling on third down, converting 1-of-8; the 49ers couldn’t move the ball.

Nick Mullens has sunk back to mediocrity and continues to have issues with throwing the ball down the field. Mullens finished 18-of-32 for 221, one touchdown, and two picks.

Tampa Bay native, Matt Breida, put on a show in front of friends and family. The only 49er able to do anything ran for 106 yards on 14 attempts.

Jameis Winston earned the starting position again this week and threw for 312 yards and two touchdowns.

Tampa Bay won the battle between the two worst teams at taking care of the football. The Bucs defense forced two interceptions while sacking Mullens four times with consistent pressure.

With five games remaining, the 49ers sit at 2-9, appear to be a sure lock at the top pick in the draft.