The last place a 0-2 NBA team wants to play when trying to get its first win of the season is Oklahoma City. The Thunder had a 9-1 opening night record at home heading into the game versus the Kings on Sunday night. OKC also had won 74.2-percent of their home games at the Chesapeake Energy Arena going the 2018-19 home opener. That is what you call a “real uphill battle.”

The Kings parlayed a two-point first quarter lead into a 12-point halftime lead. Everyone knew the Thunder would not go quietly–especially with Superstar Russell Westbrook back for the first time this season after a knee scope.

The Kings held a 97-90 lead at the end of three quarters and then had to gut it out for the final 12 minutes.

The Kings (1-2) led by Justin Jackson, Willie Cauley-Stein and De’Aaron Fox outscored OKC 34-30 in the fourth period and won their first game of the season 131-120. Beating the Thunder (0-3) on the road is a real motivator for a young team like Sacramento.

Sacramento turned to a vet for a lift

Kings head coach Dave Joerger inserted NBA veteran Iman Shumpert into the starting lineup on Sunday night. Shumpert gave the team an immediate lift by scoring 16 of their 34 first quarter points. He hit 4-of-6 3-point shots in the opening 12 minutes.

Fans should not expect Shumpert to produce those kinds of numbers on a regular basis but he will be good as a “spark plug” for the team during the season.

Defense
It may seem odd to talk about defense when a team gives up 120 points, but it has to be a discussion for this game. One of the key issues was not allowing long scoring runs. In the game in New Orleans, the Pelicans went on very long scoring runs which were back breakers. Sacramento did not let that happen on Sunday which helped them win the game.

The Kings also held the Thunder to 44.2-percent shooting (46-for-104) overall. In their two losses, the Jazz and Pelicans shot over 50-percent for the game. Scoring is up in the NBA dramatically as teams are pushing the pace, but defense will still be important to winning games.

Rookie watch
Marvin Bagley III came off the bench and played just over 23 minutes. MBIII scored 13 points and grabbed seven rebounds. Five of those rebounds were off the offensive glass setting up second-chance opportunities. He attacked the basket often looking like he had jumped off a mini-trampoline. The young man can “raise the roof.”

Harry Giles III played almost 17 minutes and did not foul out. That is significant because he was assigned to slow down Steven Adams, which is no easy task for a veteran, let alone a rookie. HGIII did put a crimp in Adams style and managed to score eight points to go with six rebounds.

The Fox was on the loose
After the game, coach Dave Joerger said he may have played Fox for too many minutes (41:59) in the contest. Not only did the second-year point guard push the pace but he also had to defend against Russell Westbrook for 35 minutes. Fox did look tired during his postgame interview.

Fox recorded a double-double putting up 22 points and dishing out 10 assists in the victory. He hit 7-of 12 shots from the field and converted 7-of-9 opportunities from the charity stripe. 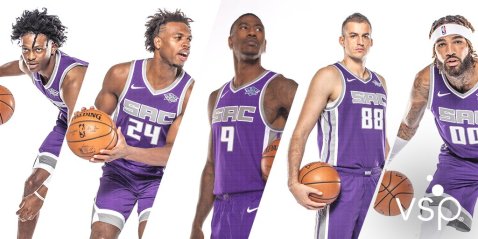 Up Next
The Kings wrap up this three-game road trip on Tuesday night in Denver against a very tough Nuggets team. The Nuggets are currently 3-0 after squeaking out a 100-98 win over the Golden State Warriors on Sunday night.