The San Jose Barracuda were back at it. This time, the opponent was the Stockton Heat at Stockton Arena on Saturday night.

San Jose was ready to beat Stockton, but there were other aspects of the rivalry game for fans to notice, like, say, Filip Sanberg’s season debut and Evan Weinger’s professional debut.

If you look closely, you’ll see @EvanWeinger pick up his first pro point for the #SJBarracuda 😎 pic.twitter.com/tuFMum1BgT

The Cuda took a 3-0 lead at the 11:21 mark of the second period. Weinger scored his first pro goal–an unassisted goal–for a two-point night at the time.

The Cuda had a huge penalty kill following the Heat’s 5-for-3. Vincent Praplan was called for cross-checking and Middleton went to the box for hooking. Unfortunately, Stockton spoiled San Jose’s hopes of a shutout. Curtis Lazar helped his team get on the board to cut the lead to 3-1 just 2:14 later. Lazar’s goal was assisted by Tyler Graovac and Kerby Rychel.

Cuda goalie Josef Korenar continued to make the necessary saves to keep his team in the game, including the one in the video below.

Another big save by Korenar. We sense a trend… pic.twitter.com/DamRRwDa2b

The Cuda made it a 4-1 game just 2:21 into the third period. Manuel Wiederer scored his first goal on the season. Wiederer’s goal was assisted by Lukas Radil.

Soon enough, Stockton got on San Jose’s nerves with three goals in the period. Kerby Rychel scored his second and third goals on the season at the 8:03 and 11:57 marks, respectively. Rychel’s goals were assisted by Mike McMurtry and Ryan Lomberg then Lomberg. The Cuda managed to reduce the deficit to 5-3 at the 14:12 mark of the period. Francis Perron scored his third goal on the season. Perron’s goal was assisted by Halbgewachs and Jeremy Roy. Rychel later notched his fourth goal on the season with 4:40 left in the period.

But San Jose looked confident and McCarthy sealed the win by putting the puck into the net for a short-handed, empty-net goal with 57 seconds left in regulation. McCarthy’s second goal on the season helped the Cuda to a 6-4 win over the Heat. 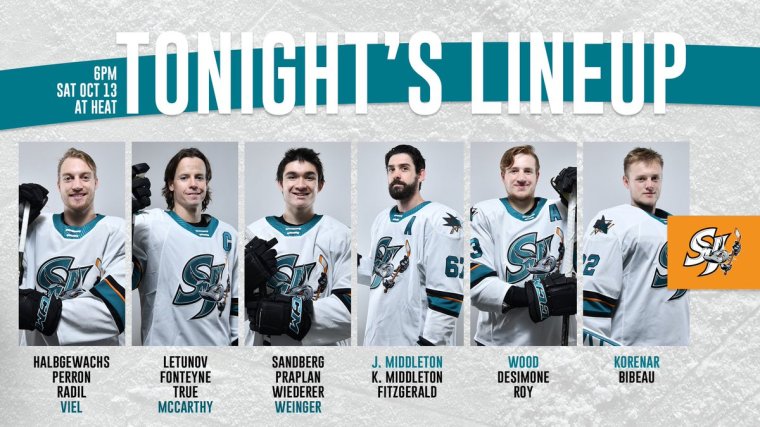 Up Next
The Barracuda return to SAP Center to host the Tuscon Roadrunners on Monday, October 15 at 7:00 pm PT.