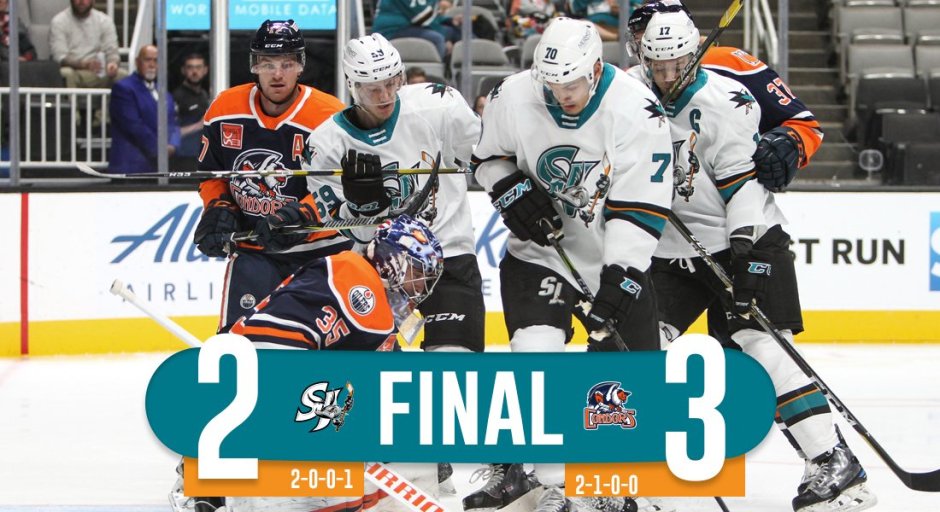 SAN JOSE, Calif. — The Bakersfield Condors (2-1-0-0) received goals from Cooper Marody and Tyler Benson as well as good goaltending from Al Montoya in the shootout to snap the San Jose Barracuda’s (2-0-0-1) two-game winning streak with a 3-2 shootout victory at SAP Center on Wednesday evening.

San Jose would draw first blood early in the first period. Manny Wiederer won a battle just to the right of the goal line. He then fed a pass back up to the point to Keaton Middleton, who fired a shot into a traffic jam in front of the net. Alexander True was in the middle of the scrum where the puck glanced off his stick that rolled past Montoya into the back of the net for a 1-0 lead. True’s second goal of the season came at the 4:21 mark.

Evan Polei, who made his season debut for the Condors, evened up the score when he was able to redirect a pass from Josh Currie past Cuda goalie Antoine Bibeau. Polei had two point-blank chances stopped by Bibeau a short time earlier, but the third time was a charm, as it led to Polei’s first goal of the season at the 12:36 mark of the first period.

Bakersfield enjoyed a 16-5 shot advantage as San Jose came out flat in the first period, but Bibeau held down the fort and kept the game even at 1-1 heading into the first intermission.

Jayden Halbgewachs would give the Cuda the lead eight seconds into a power play in the second period. Jeremy Roy fired a shot in from the top of the point that was initially saved by Montoya. After whacking at the puck, Halbgewachs was able to collect the rebound and back hand the puck past Montoya for his second goal of the season at the 7:51 mark. Vincent Praplan was credited with the secondary assist.

“We got a young team and we want to play with speed every game,” said Halbgewachs. “That’s a big part of my game, creating offense. If I use my speed, opportunities are going to be there.”

Joe Gambradella gave the Condors the equalizer just seconds after a penalty to Nolan Vesey expired. Gambradella won a battle along the boards near center ice and escaped with the puck skating in all alone against Bibeau and snapped home a wrist shot to the right corner of the goal that beat Bibeau for his first goal of the season at the 7:28 of the third period. Patrick Russel and William Lagesson were both credited with assists.

Halbgewachs had the best chance to end it in overtime. After breaking up a 2-on-1 break by Bakerfield, he skated out of the defensive zone and received a pass that sent him on a breakaway attempt, only to have Montoya out wait him and make the save on his back hand attempt.

“He’s not the biggest guy but he plays on the inside,” said captain John McCarthy about what Halbgewachs brings to the team. “That’s huge especially when you don’t have the size to muscle people around. Like you saw tonight he gets a lot of chances that way.”

The Cuda earned a late power play late in overtime, but weren’t able to capitalize on the abbreviated man advantage.

“We were lucky to get a point tonight,” said head coach Roy Sommer. “A lot of turnovers, (we played) kind of sloppy. They had more jump than we did tonight.”

GAME NOTES: San Jose went 1-for-5 on what was an uninspiring power play. Bakersfield went 0-for3.

Fisticuffs! Cuda forward Jeffery Viel exchanged pleasantries with Polei just inside the Condors’ zone at the 15:58 mark of the first period.

The announced attendance was 2,527.

UP NEXT: San Jose will travel up Highway 5 to take on their NorCal rival Stockton Heat on Saturday, October 13 at Stockton Arena at 6:00 pm PT.