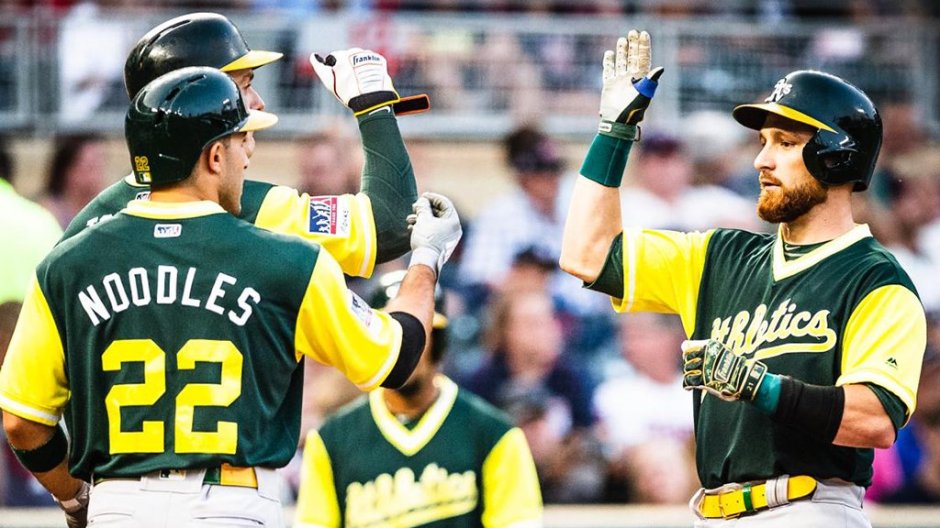 The Oakland Athletics took a 2-1 lead in their four-game series with Minnesota by downing the Twins 6-2 in game three on Saturday night in the Twin Cities. The A’s won the game using their typical formula of strong starting pitching, consistent bullpen relief  and power production at the plate.

The Athletics have found themselves in a must win situation in each of the games in Minnesota. The first place Houston Astros have been on a tear winning four consecutive games forcing Oakland to win just to stay 1.5 games back in second place in the American League West.

The Seattle Mariners have also been applying pressure on the A’s as they have won two games in a row to stay just 4.0 games behind Oakland in third place. Many have tried to write the Mariners out of the playoff hunt but someone forgot to tell Seattle they’re done for the season. With six games left to play against the A’s and three versus the Astros, the M’s can erase a four game deficit very quickly.

Mike Fiers (10-6) started the game for the A’s and once again showed why the team had focused on adding him to the roster. Fiers worked 5.2 innings giving up just one run (earned) on five hits. He struck out seven Twins and walked just two. Fiers threw 100 pitches (63 strikes).

The one run Fiers gave up was spectacular. In the bottom of the fourth inning, he tried to throw a 3-2 fastball past Miguel Sano but was unsuccessful. Sano crushed the ball 455 feet into the third deck in left center field for his 12th home run of the season.

Fiers did get credit for the win.

A’s bullpen does its job again

Lou Trivino was brought in to relieve Fiers and ended the bottom of the sixth inning. “Sweet Lou” ran into some trouble in the seventh when he gave up a home run to Tyler Austin and then hit Willians Astudillo with a pitch. Ryan Buchter entered the game but was unable to get an out, so the call went to Jeurys Familia who shut the Twins down.

Familia worked the eighth inning to set it up Blake Treinen in a non-save situation. Treinen needed the work so that is why he was used in the game. He pitched a perfect ninth and the A’s won their 78th game of 2018.

Lucroy had an amazing night with the bat

The A’s backstop went 2-for-4 in the game with a home run and recorded four RBI. Lucroy drove in the A’s first run of the contest in the top of the second inning when he singled to left driving home Chad Pinder. It was the 500th RBI of his career.

Lucroy was just getting started. In the top of the fourth inning, he clubbed a home run to left center field that plated Mark Canha and Ramon Laureano ahead of him. It was the third home run of the season for Lucroy, but more importantly, it was 13,000th in Athletics’ (Philadelphia, Kansas City, Oakland) history. Lucroy will now be in the A’s milestone record book forever more.