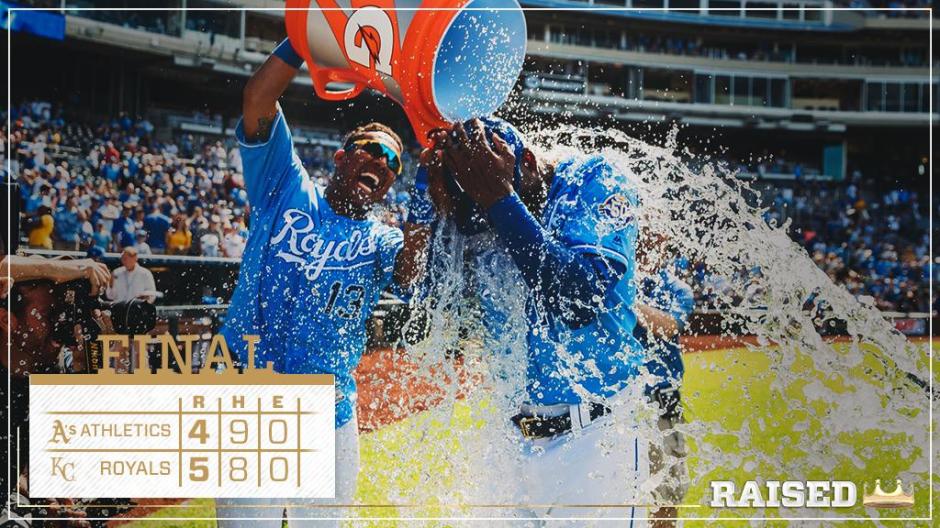 After a team destroys their opponents 16-0 the night before, there can be a tendency for a club to come out in the next game and be incapable of putting any runs up on the board. After the Kansas City Royals scored two runs in the bottom of the first inning on Saturday afternoon to take a 2-0 lead, it looked like game two of this three-game series might be one of those games.

The situation became grimmer in the bottom of the second inning when the Royals added to their lead. With two out in the inning, Ryan Goins laid down a bunt in front of the plate. Catcher Bruce Maxwell fielder the ball cleanly and make a quick throw to first for a “bang-bang” out. Well, wait just a minute. The Royals decided to challenge the call. Video replay in New York overturned the call on the field and Goins was called safe at first.

Now with two out and a runner at first, shortstop Alcides Escobar stepped into the batter’s box to face A’s starter Trevor Cahill. Escobar hit the first pitch to him off the fence in right field for an RBI-triple as Goins was able to come home and score easily from first base.

That brought leadoff man Jon Jay back to bat. Jay led the game off with a single and eventually scored the first run of the game. Jay – the Royals DH – hit the 1-1 pitch through the hole on the left side of the infield for a double. Escobar was able to trot home to score the fourth run of the game for Kansas City. When the second inning was over, the Royals led the Athletics 4-0.

The Athletics bounced back in the top of the third when Marcus Semien hit a one-out double to left-center field. After Matt Joyce struck out, Jed Lowrie singled to right field driving Semien home for the A’s first run of the contest cutting the Royals lead to 4-1.

The A’s went right back to work in the fourth inning. With one out and Fowler at first, Piscottty doubled to left field. Fowler blew through third base coach Matt Williams stop sign and was thrown out at home. Maxwell singled to left-center field drivng Piscotty home for the A’s second run of the game.

Bruce Maxwell led off the top of the seventh inning by hitting a 3-1 Jason Hammel pitch over the center field wall for his first home run of the season. The Athletics had cut the Kansas City lead to 4-3.

In the top of the eighth inning, the A’s received some bad news when Matt Joyce had to exit the game due to an injured back. Matt Olson led off the inning by hitting a single to left-center field. Olson advanced to second when Chapman grounded out. Chad Pinder entered the game as a pinch-hitter for Fowler. Pinder singled up the middle sending Olson home to tie the game at 4-4.

With one out in the home-half of the eighth inning, Jorge Soler hit his ninth home run of the season over left field wall to give the Royals a 5-4 lead. It would prove to be the game winning hit.

In the Batter’s Box