The San Jose Earthquakes traveled to Western Canada to take on the Vancouver WhiteCaps–the team that eliminated them from the 2017 MLS Cup playoffs in the Knockout Round–in hopes of getting a win at BC Place on Wednesday night.

The Quakes appeared to be focused and ready for the WhiteCaps, according to a tweet on the team’s Twitter page.

However, the WhiteCaps got on the board first as Cristian Techara slipped one behind the Quakes’ back line at the 19th minute. Techara’s opening goal was the probable reason why Andrew Tarbell stepped up his game and drove down low to make a right-handed save to fend off a low-driven kick that looked like it was going to sneak into the net.

Danny Hoesen snatched the game-tying goal just one second before the end of the first half. The Quakes and WhiteCaps were tied 1-1 at the halftime break.

The second half kicked off and Nick Lima kicked in a sweet goal to put the Quakes ahead 2-1 at the 54th minute. But the Quakes’ lead was short-lived as the WhiteCaps tied the game 2-2 on Yordy Reyna’s equalizer at the 64th minute.

Seven minutes after the officials handed a yellow card to Anibal Godoy, the Quakes made their first substitution of the match as Francois Affolter went in for Shea Salinas and their captain Chris Wondolowski stepped on the field while Vako stepped out of the field.

The Quakes’ Florian Jungwirth got a yellow card for a slight jersey tug on a WhiteCaps player. Then, the Quakes made their third and final substitution of the match when Fatai Alashe took Jackson Yueill’s place on the field.

The match remained in a 2-2 deadlock, but there was still four minutes of stoppage time. Yet, the Quakes were unable to snap out of the deadlock, but took the 2-2 draw against the WhiteCaps nonetheless. 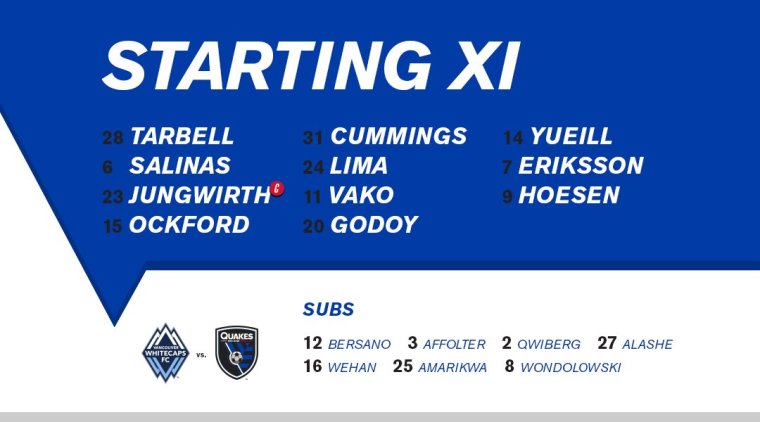 Up Next
The Quakes will return home to host D.C. United Saturday night at 7:30 pm PST.