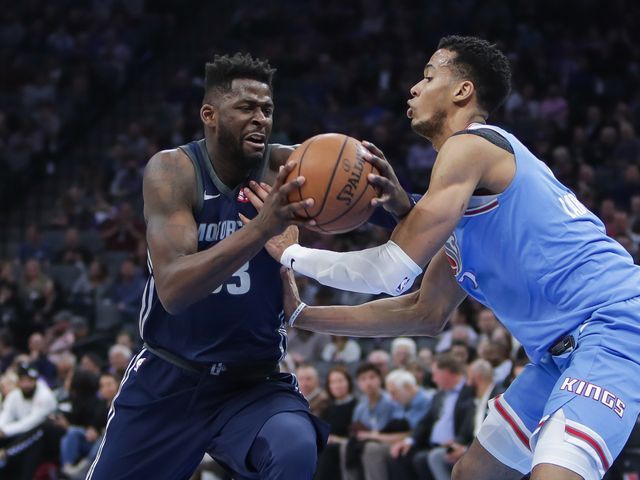 SACRAMENTO–Saturday, the Kings drew praise from the NBA’s hottest team in a narrow loss at Salt Lake City.

Back in Sacramento Monday, the Kings let the struggling Pistons capture just their second road win of 2018, losing 106-90 at Golden 1 Center.

And the moral of that story? The NBA schedule is unrelenting, and a sixth game in nine days will blunt the progress of any youthful squad otherwise in the process of a significant growth spurt.

The Pistons got back-to-back baskets from Blake Griffin to break a 57-57 tie midway through the third quarter and never trailed again, breaking their 12-game road, losing streak. Griffin led the way for Detroit with 26 points, nine rebounds and seven assists.

The Pistons hadn’t won on the road since beating the Nets in Brooklyn on January 10.

“This time of year, you’ll take it any way you can get it, but you get one on the road after being on the road for eight nights already — it’s always great,” Griffin said. “We took care of business and we have to go and do it again.”

The Kings failed to win for the fourth time in their last five home games in large part due to their deficiencies beyond the arc and at the free throw line. The Kings missed 17 of their 23 three-point attempts and made just four free throws (in nine attempts) in the game. The Pistons, with Griffin and Andre Drummond leading the way,  held a slight edge on the glass (44-39) along with significant advantages in made threes (14) and free throws (18 for 22).

The unrelenting schedule affected the Kings down the stretch on Saturday night against Utah when the Jazz pulled away for a 103-97 win, their 20th in their last 22 games. Afterwards, the Jazz complimented the Kings for their offensive tenacity and their ability to fashion several runs when Utah threatened to pull away. Against the Pistons, the Kings missed injured facilitator Bogdan Bogdanovich, and failed to capture any offensive flow.

“We talked about it this morning that it had a high probability of being a letdown game but it was a tough game for us,” Kings coach Dave Joerger said. “It’s that type of game we (have to) let roll off of us.”

Surprisingly, the Kings’ veterans put up far inferior numbers than their youthful teammates. The trio of Zach Randoloh, Garrett Temple and Kosta Koufos combined to miss 18 of 21 shots. Sacramento’s two rookie starters, Justin Jackson and De’Andre Fox, combined to make 15 of their 20 shots from the floor.

The Kings take a much-needed two days off before facing the Hawks on Thursday at Golden 1 Center.