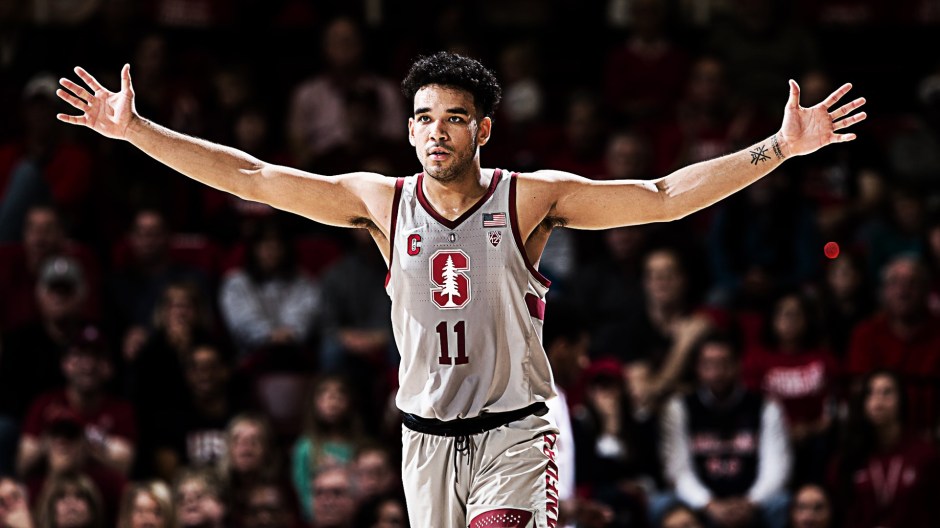 photo by Casey Valentine isiphotos.com: The Stanford Cardinal’s Dorian Pickens (11) waves to the crowd at Maples Pavilion as the Cardinal and the visiting BYU Cougars battle to a three point Cardinal win

PALO ALTO–As many of you know the Stanford Cardinal have been finishing strong they were pretty mediocre for most of the year but they’ve won four of the last five games in the Pac 12 and they won the first game of the Pac 12 Tournament beating the Cal Bears and they got bounced in the second game by the UCLA Bruins both games were at the T-Mobile Center in Las Vegas.

The got invited to the NIT Tournament and they were seated number three in the NIT Tournament and last Wednesday they met number six BYU and they beat them 86-83 at Maples Pavilion. In a game the Cardinal had a 15 point lead BYU almost caught them in the end. Now the Cardinal are headed to Stillwater Oklahoma and their going to play a number two seed the Oklahoma State Cowboys.

Jerod Haase head coach of the Cardinal and the players are going to have their work cut out for them on Monday. Stanford has Michael Humphrey, Dorian Picken, and Reid Travis who were effective on offense against the Cougars on Wednesday night. The Cardinal had had five players who finished in double figures, Oscar da Silva 13, Humphrey 11, Travis 25, Pickens 17, and Dorian Davis 12.