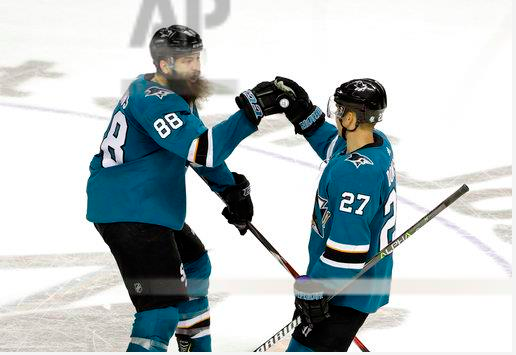 SAN JOSE—The end of the road to Martin Jones’ 100th win was rocky.

Heading into December, Jones sat at 98 career wins, but struggled mightily, losing five of his first six games and allowing four or more goals in all of them. Second-year goalie Aaron Dell blew him out of the water during that stretch, allowing just seven goals in four games.

But once he hit the century mark with a shutout against the Kings Dec. 23, he seems to have turned a corner.

Jones recorded 32 saves in San Jose’s 3-2 shootout win against the Calgary Flames, including one after Joe Pavelski’s goal to start the shootout to give the Sharks an early advantage. After Burns and MIkael Backlund missed in succession, rookie Joonas Donskoi scored to seal the victory and give Jones victory No. 101.

It wasn’t easy for San Jose, which battled back from a 2-1 first period deficit to cap off a 4-1-1 stretch against Pacific Division rivals. Calgary owned the boards, beating the Sharks in hit count 28-11, but San Jose found a way to become more physical later in the game and push it to overtime.

“We just started winning more puck battles on the wall and started to manage the puck a bit better,” Jones said when asked what changed for San Jose. “But when you go for three days of not skating and getting just one practice in, it can be hard to start the game. But we did a good job fighting through it and sticking with our game to get two points.”

Timo Meier erased the 2-1 deficit that had stood for nearly 35 minutes midway through the third period with a goal, sending the Sharks (20-11-4) to overtime, where Jones made four saves. San Jose’s deficit wasn’t for a lack of chances—it put up 21 shots in the first two periods, including 13 in the second, before Meier’s goal in the third.

“You didn’t sense any panic on the bench,” head coach Peter DeBoer said. “That comes from the fact that we had some really good looks. We only had one goal in the first two periods, but we felt that there was a goal there somewhere, we just didn’t stick it in the net. There was a feeling that if we just kept with it, eventually we would get one.”

The Flames (18-15-4) wasted no time building their early lead, scoring just over four minutes into the game on Garnet Hathaway’s second goal of the season. Pavelski answered three minutes later on a power play goal, but Backlund added a power play goal of his own just before the 16-minute mark in the first period.

Despite Backlund’s goal, the Sharks allowed Calgary to score just the one power play goal in three ties— they rank No. 2 in the NHL in penalty kill percentage. San Jose has also been solid itself a man up, ranking No. 6 in power play percentage.

The Sharks’ five-on-five offense, on the other hand, has not been stellar—they rank 22nd in the league in goals scored at 2.7 per game.

At a time in the year in which teams can separate themselves in division races, the Sharks are trending in the right direction. They’ve racked up three straight wins, but San Jose’s captain certainly isn’t satisfied.

“You’ve got to put some streaks together,” Pavelski said. “To win three in a row, you can’t be satisfied. You’ve got to go for four or five. I don’t know if this is the time or not, hopefully you can start creating a little separation.”