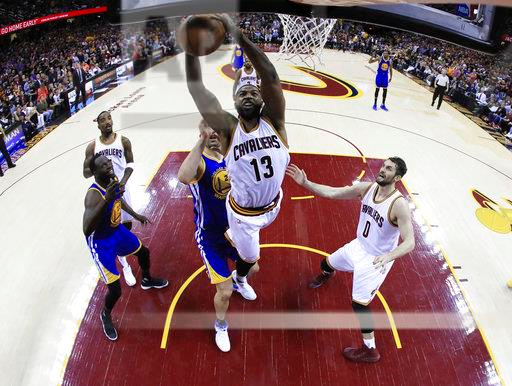 Cleveland Cavaliers center Tristan Thompson (13) pulls down a rebound against the Golden State Warriors during the second half of Game 4 of basketball’s NBA Finals in Cleveland, Friday, June 9, 2017. Cleveland won 137-116. (Ronald Martinez/Pool Photo via AP)

It was a game that was supposed to make even more history for the Golden State Warriors but the Cleveland Cavaliers had different plans for Curry and Company. Friday night’s Game 4 was all Cavaliers from beginning to end.

The Warriors had a slow start in the first quarter and the Cavaliers came out like a house on fire and never looked back. At the end of the first quarter Cleveland was leading 49-33 and by half time the score was 86-68 in favor of LeBron and Company. The Cavaliers were relentless bringing an onslaughts of three’s throughout the game playing the aggressive brand of basketball that they are known for.

While the Warriors played the Cavaliers even through the third and fourth quarters, even was not going to win this game. The damage had been done in the first half. The final was 137-116.

Superstars Kyrie Irving, LeBron James and Kevin Love played an outstanding game. Irving finished with 40 points, James had 31 points and Love with 23. Irving’s 40 points were especially amazing since Klay Thompson was all over him throughout the game. J. Smith who had not shown up at all the first three game played a great game scoring 15 points.

On the other hand the Warriors were flat with the exception of Kevin Durant who finished with 35 points. As this series had gotten underway, Durant and Curry were neck and neck when it came to who would be the most valuable player but it would appear that tonight’s game settled that discussion. Curry only had 14 points, Thompson had 13 and Draymond Green finished with 16. It was not the sort of game that dreams are made of.

Monday night the Warriors will be back at Oracle Arena to close this series out and win their second championship in the last three years. A second game like this for Golden State is hardly likely. Tip-off will be on June 12 at 6:00 PT.