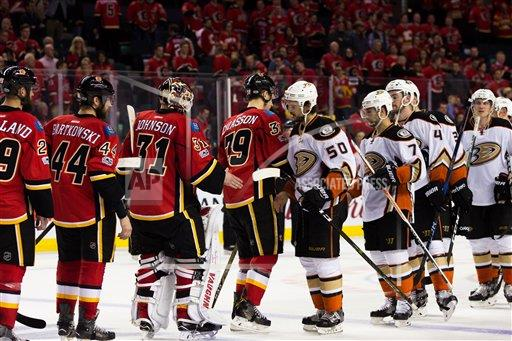 AP file photo: CALGARY, AB – APRIL 19: The Anaheim Ducks move on to the second round of the NHL Stanley Cup playoffs, sweeping the Calgary Flames in 4. As is customary in the NHL, the teams have a handshake at the end of each series during game 4 of the first round of the Stanley Cup Playoffs between the Anaheim Ducks and the Calgary Flames on April 19, 2017 at Scotiabank Saddledome in Calgary, AB. (Photo by Clint Trahan/Icon Sportswire) (Icon Sportswire via AP Images

On the NHL Stanley Cup podcast with Len:

A look at the playoff match ups:

Get the latest inside scoop on the NHL Stanley Cup Playoffs at http://www.sportsradioservice.com