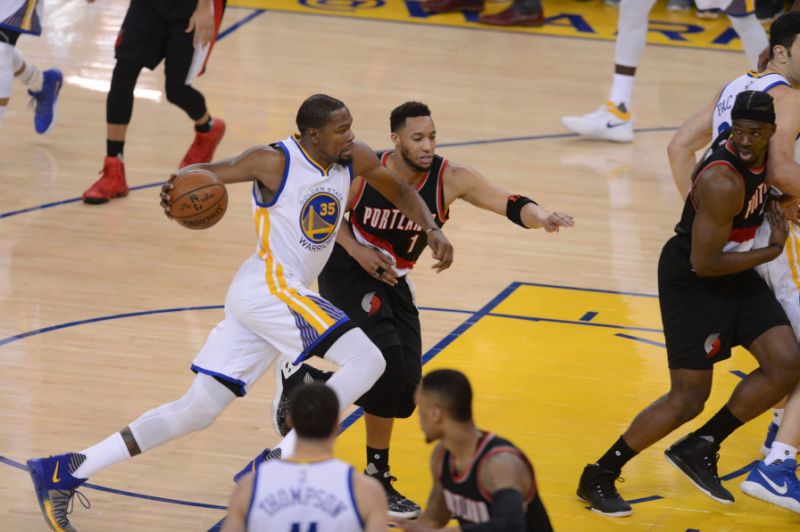 yahoo.com photo: The Golden State Warriors Kevin Durant is unlikely for game two in Oakland vs. the Portland Trailblazers on Wednesday night

OAKLAND–The Portland Trailblazers are in trouble they have huge injuries going into game two tonight vs. the Golden State Warriors at Oracle Arena with CJ McCullum, Allen Crabbe, and Jusuf Nurkic. These injuries are going to no doubt impact the Trailblazers, Jusuf Nurkic got traded mid season he comes over to the Blazers and he’s kind of the big guy with the rebounding and his presence and he helped sparked their second half run and help propel them into the post season.

The Warriors will be sitting Kevin Durant, Matt Barnes, and Shawn Livingston and how much will this impact the Warriors they’ll find out tonight in game two. They’ll miss Barnes out of the line up and he’s kind of a pit bull for Golden State but he’s not the guy whose going to make a difference for the Warriors. When your talking about Livingston he’s a key guy off the bench. Durant is Kevin Durant the good news these aren’t serious injuries, their not long term injuries it’s not like what they had before.

David Zizmor does the Warriors podcasts each week at http://www.sportsradioservice.com