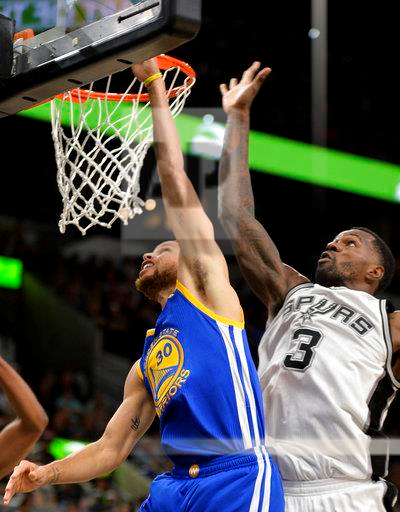 The Warriors showed their mettle Wednesday night in San Antonio as they overcame a terrible first period to come back and defeat the Spurs 110-98. The Spurs, the number one defensive team in the NBA, did everything right and the Dubs, the number one offensive team, did everything wrong. The Spurs went on a 15-0 run to start the game. The Warriors did not score a point in the first 4 minutes and 14 seconds of play in the quarter. The Spurs led 23-5, but the Dubs behind Andre Iguodala were able to chip away and trailed 33-17 after the first 12 minutes of action.

The Warriors outscored the Spurs 37-24 in the second quarter. The Warriors defense was able to stop the Spurs’ attack, and the best offense in the NBA took charge. The Dubs tied the score at 45, but the Spurs went on a 7-0 run before Steph Curry hit a bucket. The Spurs increased the lead to 8 near the end of the half, but the Dubs didn’t fold and crept to within 3. San Antonio led 57-54 at the intermission.

The Warriors, determined to win in San Antonio, owned the third quarter. They outscored the Spurs 30-20. The Warriors finished the third quarter with a seven-point lead 84-77. The Warriors continued to play well on both ends of the court. The Dubs refused to give an inch, and the best the Spurs could do was close the gap to four. However, former Spur, David West probably played his best game of the year as a Warrior as he made several key buckets to help secure the win for the Dubs.

Game Notes and Stats- The Warriors, with the win, improve to 61-14 and now own a 3 and 1/2 game advantage over the Spurs for the best record in the NBA. The Dubs have 7 games left, and all but one are at Oracle Arena. The Spurs fall to 57-17.

Steph Curry had another double-double. Steph had 19 points, 11 assists, and 3 rebounds. Klay Thompson’s line was 23 points, 2 rebounds, and one blocked shot. The bench was led by David West. West scored 15, had 5 assists, 4 rebounds, and 2 blocks. Andre Iguodala kicked in with 14, and he had 6 rebounds. Steph was 4-for-8 in the 3 -point department and Klay Thompson also made 4 3-pointers. Kawhi Leonard led the Spurs with 19. LaMarcus Aldridge 17, Danny Green 16, and Pau Gasol 18, off the bench.

The Warriors shot 51.2% from the floor and held the Spurs to just 41%. The Warriors had another game with 30 assists. They made 7 steals and had 7 blocks on defense. Each team committed 15 turnovers.

The Warriors return home to face the Houston Rockets Friday night at Oracle Arena. Game time is at 7:30 pm. The Warriors then face the Washington Wizards Sunday evening in Oakland at 5:00 pm. The Wizards beat the Dubs in Washington on February 28th. Kevin Durant was injured that night, and the Dubs are looking to get a little revenge when they meet Sunday night.