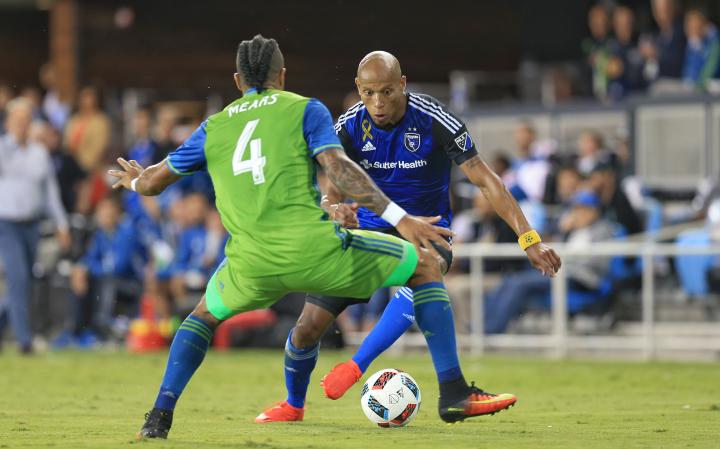 sjearthquakes.com photo: San Jose Earthquakes Chris Wondolowski scores his tenth goal becomes the first player to score ten or more goals in seven seasons as he faces off here against the Seattle Sound on Saturday night at Avaya Stadium

SAN JOSE, Calif.-The Earthquakes struck early, but failed to fend off a late surge from an aggressive Seattle Sounders team on Saturday night, settling for a 1-1 draw in a crucial game in the Western Conference race.

The draw between the Western Conference rivals caps off a frustrating four-game skid for San Jose in which the team has been held without a win while sitting in the 7th spot in the standings.

While the Earthquakes will certainly take the one point allotted to them in Saturday night’ tie, the frustration is mounting within an organization that’s on the fringe of being eliminated from the playoff race.

“It hurts,” said head coach Dominic Kinnear. “If you look at New York, Houston and even tonight, you walk off the field with two points out of those three games. It hurts you in the standings and it hurts because I think we should have had more.”

Entering the day just three points behind the red line in a tight race for the final playoff position, San Jose looked to snap their untimely winless streak with a relentless attack that kept Seattle on their heals through most of the early going.

San Jose tested Seattle’s net minder Stefan Frei early and often while scrapping their way to multiple set pieces early on in the match, sending multiple dangerous attempts towards the net that were just barely turned away.

But it would be none other than Chris Wandolowski who would snap the Earthquakes’ streak of 235 straight minutes without a goal, as the captain would flick a shot passed the outstretched hands of Frei in the 20′ minute after a nice touch by Jordan Stewart sent the ball towards the front of the net.

Wandolowski’s score would mark his 10th career goal against Seattle, the most by a single player in MLS history against the team.

The Sounders would respond with a tempered attack of their own, as Seattle’s Tyrone Mears threatened an equalizer after skipping a ball across the front of the San Jose goal just minutes later, but San Jose would escape the half holding their 1-0 advantage.

Entering the final half of play in a desperate bid to keep their own playoff hopes alive, the Sounders pushed forward against the San Jose defense with relentless pressure of their own, dominating the control of the game.

San Jose’s defense would eventually break on a costly mistake, allowing a free kick from Nicolas Lodeiro to squeak past goaltender David Bingham to notch things up at 1-1.

San Jose fought desperately for a last-minute score to reclaim the lead, sending multiple threatening free kicks and a botched strike by Chad Barrett towards Seattle’s net, but had their efforts turned away to end the night with just one point.

After the game, both coaches expressed dismay at the outcome that barely helped either of the two playoff hopefuls.

“You can’t creep up, you have to take big steps,” said Kinnear. “But right now we’re creeping instead of taking big steps.”