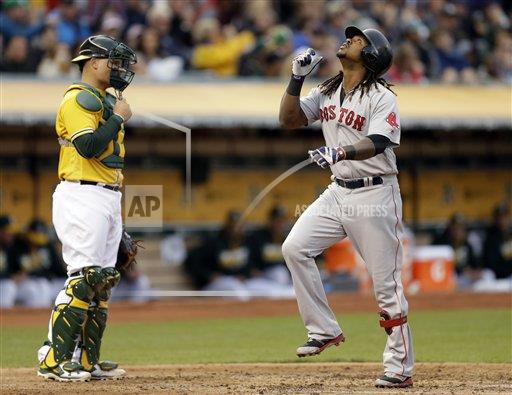 A’s manager Bob Melvin used the word relentless to describe the Boston Red Sox, but this time it isn’t a weathered sports cliché.  When it comes to facing the A’s, the Red Sox really are relentless.

The A’s fell for the fifth consecutive time to the sock ’em Sox on Saturday night, and actually achieved a season-best in terms of runs allowed, losing just 11-2.  In the first four meeting with Boston, the A’s allowed 56 runs, and at least 13 in each game.

Before the A’s could manage their first hit–that didn’t come until the sixth inning against Red Sox’ starter Rick Porcello–Boston put up nine runs.  The body blows Melvin described came in the third when the Red Sox scored seven runs, all seven with two outs.

A’s starter Daniel Mengden, recalled from AAA Nashville to make the start, didn’t survive that third inning.  So far in his career, Mengden’s no fan of pitching in the Coliseum, he fell to 0-5 in home starts, tying an undesirable team record by losing his first five career decisions at the Coliseum joining Dallas Braden and Steve Ontiveros on that list.

The Red Sox pounded out 17 hits, with Mengden allowing eight of those, highlighting the issues the A’s ragged bullpen have had with Boston this season.  One night after the bullpen threw 187 pitches, three A’s relievers actually kept things respectable, led by Chris Smith, who got the team through four innings himself, allowing just one run.

Porcello retired the first 15 hitters he faced, with some impressive defense behind him, and picked up the win, his major league-leading 19th.  Porcello’s enjoyed success against everyone he faced this season, not just the A’s, as he became the first Red Sox pitcher in their long history to win 19 times in 22 decisions.

The Red Sox third straight win allowed them to gain a tie atop the AL East with the Blue Jays, with both teams two games ahead of the Orioles.  All three teams would qualify for the playoffs if the season ended today, but instead will jockey head-to-head with at least six meetings between each of the teams still remaining in the last month of the season.

The A’s fell 21 games under .500 with the loss, their fifth straight, further illustrating two clubs heading in opposite directions.  The A’s managed five hits after Porcello blanked them over the first five innings, but they rank last in the AL in runs scored after the abbreviated offensive effort.

CANSECO RETURNS: Jose Canseco made his rounds at the Coliseum on the night the team honored the slugger with a bobblehead giveaway.  When asked if MLB has toughened its stance against performance-enhancing drugs, he lauded the league for its efforts, saying the risk/reward no longer makes it prudent to experiment with PED’s given the stringent penalties in place.