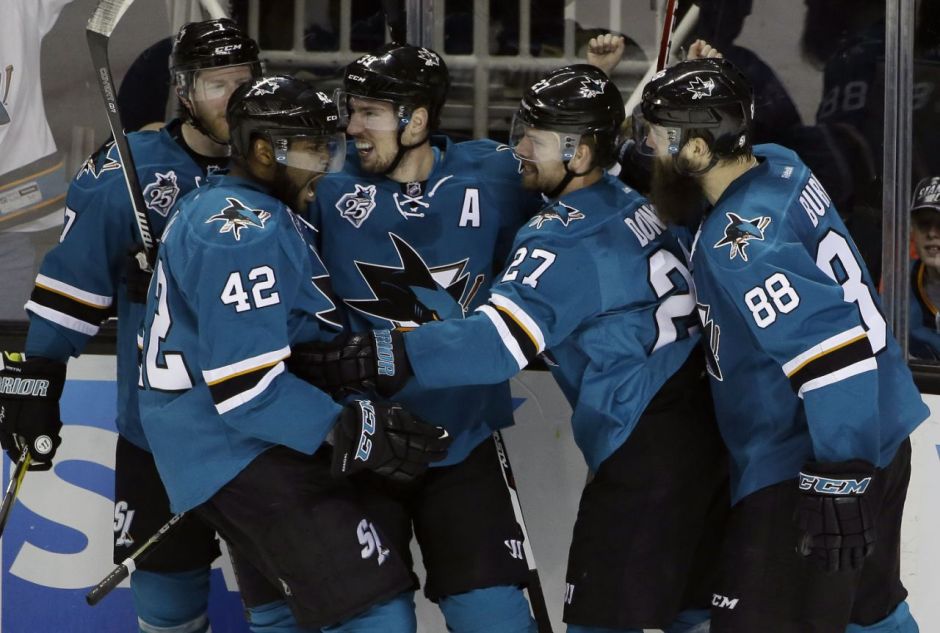 SAN JOSE– The Sharks beat the Nashville Predators in the first game of the NHL’s Western Conference Semi-Finals. The Sharks won by a score of 5-2, with goals from four different shooters. Logan Couture scored a power play goal and an empty netter. Tomas Hertl, Joel Ward and Tommy Wingels all added to the tally. Mike Fisher and Ryan Johansen scored for Nashville, and Pekka Rinne made 33 saves on 36 shots. Martin Jones made 29 saves for the Sharks on 31 Nashville shots.

The game was uneventful until one of the Nashville skaters tripped over a breaking Sharks and fell into Pekka Rinne, taking out the goalie and his net. That play was reviewed but no goal was awarded.

The next noteworthy event was a penalty called against Melker Karlsson for hooking. The Sharks’ penalty kill started pretty well, with play moving out of the Sharks zone and into the Predators’ zone for a good part of a shift. Nashville eventually made it back in and stayed a spell but the Sharks did not give them much to shoot at. Nashville had a couple of better chances just after the penalty expired but the Sharks kept the puck out of their net.

The Sharks made a good push during the final minutes of the first period, hemming the Preds in and evening up the shot count. For most of the period, the Sharks trailed in shots by a few. At the end of the period, the Predators led 12-11, but the score was still tied at nil.

The second period started out stoppage-heavy. It seemed like one every 10 seconds but that probably was not the case. At 2:45, Matt Nieto was called for tripping Colin Wilson, which the crowd booed with gusto.

The Sharks’ penalty kill looked like it would be successful, with the Predators being evicted frequently from the offensive zone. In the final seconds of the power play, the Predators took the lead. Mike Fisher caught a pass from Ryan Johansen and held the puck for a moment while drifting backwards into the faceoff circle. He took his shot and it went by three Sharks, including Martin Jones.

The Sharks’ first power play came from an interference call on Eric Nystrom at 5:31. The Sharks’ power play did not score but it was a sight to see. The Predators got the puck out in the first 10 seconds and then not again until the last few. The Sharks put a lot of shots at the net, though few got through. The penalty killers blocked a lot of shots and looked weary by the end of it.

Trailing by a goal, the Sharks did wake up. The Predators did not have a shot on goal [between 11:03 and 2:11 left.], and then they had two before the period ended.

Fifty seconds into the third period, Ryan Johansen was called for holding and the Sharks went on their second power play. This power play did not start up as well as their first power play. It took the Sharks good forty seconds to finally get set up, and then Nashville booted them out after just a couple of chances. The second unit came on (Ward, Vlasic, Hertl, Donskoi and Martin) and changed things up. They started by carrying the puck over the line instead of dumping it in. After that, they survived a broken stick, holding the zone while it was replaced. As the penalty time ran down, Joel Ward took a pass from Marc-Edouard Vlasic and sent it along to Tomas Hertl. Hertl was posted at the corner of the net and quickly put it past Rinne to tie the game. Assists went to Ward and Vlasic.

Ward picked up another point almost ten minutes later, when he took a pass from Joonas Donskoi as they skated into the zone. Ward had enough space to duck one way and go the other, freezing Rinne at the top of his crease. Ward then put the puck behind the goaltender, who reached back with his glove and either missed the puck or knocked it in. It was Ward’s first goal of this post-season, with assists to Donskoi and Brent Burns.

Things deteriorated from there for Nashville. With 4:40 left in the game, Calle Jarnkrok was called for high-sticking Donskoi. Seconds into the power play, Logan Couture and Joe Pavelski skated in, moved the puck back and forth a couple of times, and scored again. It was Logan Couture’s goal, that he lifted lightly over Rinne’s pad from close range.

Nashville pulled Rinne with more than two minutes left, and with just under two minutes left, a bouncing puck went over Martin Jones to bring the Predators back within a goal. They kept their net empty. A few seconds after the next faceoff, Logan Couture took advantage of that and restored the Sharks’ two-goal lead.

Tommy Wingels added yet another, in a similar manner but on the other side of the ice. After that, the Predators put backup goaltender Carter Hutton in the net to prevent yet a third empty net goal.

Game Two will be on Sunday at 5:00 PT at SAP Center in San Jose.