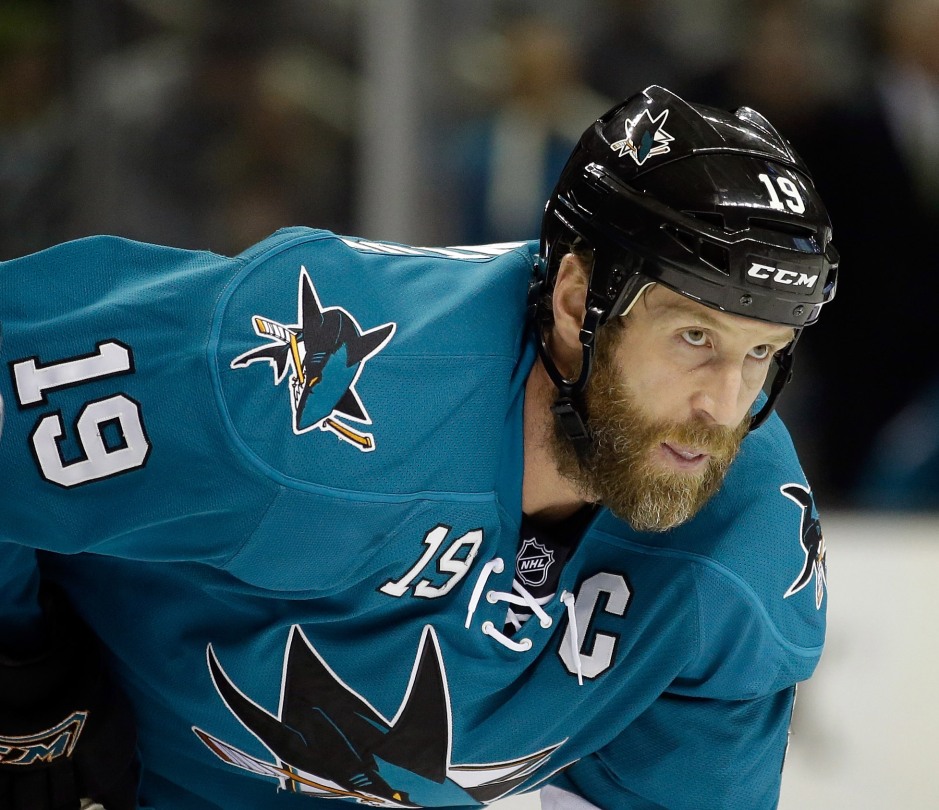 photo credit docsportstalk.com: San Jose Sharks Joe Thornton and teammates will be in L.A. to try and take the Kings out of the first round of the playoffs starting Thursday

The San Jose Sharks will face the Los Angeles Kings Thursday, in game one, round one of the 2016 Stanley Cup Playoffs. They say that lightning does not strike twice. A lot happens in a hockey game, and a playoff series can produce the same result in many different ways. But it is probably safe to predict that the Sharks will not win three games in a row and then lose four. The odds of that happening again are very slim indeed, and I don’t need to be a math genius to know that.

The Los Angeles Kings are probably the best first round opponent for the San Jose Sharks. The Kings are not only a “must play” for any team trying to get through the western conference, they also have a special place in San Jose’s heart. The last two seasons have been dark for San Jose, starting with their humiliation at the hands of the Kings two seasons ago. While the meek of heart would probably want to avoid Los Angeles entirely, few professional hockey players can be described as meek.

Two seasons is long enough to see any team change, even if change is not their objective. The Sharks have made several changes. Head coach Pete DeBoer brings a new angle to the Sharks’ game. The Kings have seen DeBoer’s Sharks several times this season, but they are nowhere near as familiar with them as they were with Todd McLellan’s team. DeBoer has coached against the Kings in the playoffs, when the New Jersey Devils faced them in the 2012 Stanley Cup Final. That was a long time ago, and he has a very different team now, except in one respect: the Kings are still the favorites to win.

Those expectations are a little bit strange. Even though the Sharks were embarrassed by their lost 3-0 lead in 2014, they did beat the Kings three times before losing. The Sharks also won the 2015-16 regular season series 3-2, going 3-1-1. The Kings have a terrible habit of starting slowly, in the regular season and the playoffs. That is a habit that is bound to trip them up eventually. It is far from unlikely that the Sharks could win this series.

Wherever they play, the Sharks have every reason to be hungrier and angrier than the Kings. The Kings have won two Stanley Cup Championships. The Sharks have not gotten to the Final yet. If NHL parity is not a myth, it is the Sharks turn for a shot.

Both teams have made significant changes to their rosters since 2014. For the Sharks, Martin Jones and James Reimer are a more formidable goalie tandem than Antti Niemi and Alex Stalock were. Jones’ star is rising. He proved this season that he can be a reliable presence in net, and can even steal a game here and there. James Reimer has proven that he can gut out some pretty gruelling playoff games, and he has already turned in some very impressive performances for San Jose.

With Martin Jones in net, the Sharks are starting the goalie who carried them through most of the season with only a few hiccups. That he used to play for the Kings should not be much of a factor, since any familiarity the Kings have with Jones will be matched by his knowledge of their skaters. Jonathan Quick is not exactly an unknown quantity for the Sharks, either. The Sharks know him well from many meetings.

The Sharks have Matt Nieto and Marc-Edouard Vlasic coming back from injury. The last time the Sharks appeared in the playoffs, also against the Kings, the collapse began with the loss of Vlasic to injury. The Sharks have added a couple of veteran defensemen since then, in Paul Martin and Roman Polak, but Vlasic’s importance cannot be understated. The Sharks played pretty well down the stretch without him but they will need all their best blue liners to go far in the playoffs.

The Sharks also have some added depth in the scoring department, in Joel Ward and Joonas Donskoi. Ward is a seasoned veteran of playoff games, and scored timely goals for Washington. Donskoi is going into his first NHL Playoffs, but he has some experience with championship games from his time in Finland. Both players were consistently helpful during the regular season, and as additions to a group that has been to the playoffs together many times, they could be difference makers for San Jose.

Melker Karlsson joined the team last season and showed that he could contribute in the scoring department. He has spent a lot of time this season on the fourth line, but DeBoer’s fourth line is very different from the fourth line that Todd McLellan would put together. It is reasonable to expect more offense and fewer penalties from the likes of Karlsson and Dainius Zubrus.

If there is an x-factor for the Sharks, I would say it is Joel Ward or James Reimer. Any of the rookies could surprise the Kings and all have to contribute to get the Sharks through the first round. But Ward and Reimer both have enough playoff experience to do some heavy lifting. Even if Reimer does not play, he provides an added sense of confidence and security that should permeate the team’s mental game.

On the Los Angeles side, defenseman Alec Martinez and forward Marian Gaborik have returned from late season injuries. The team has confidence in their readiness to play, as they recently reassigned forward Nic Down and defenseman Kevin Gravel to the AHL. Other changes to their roster over the last season include the addition of Milan Lucic, and the losses of Justin Williams and Jarret Stoll. The last two were historically problematic for the Sharks, if in very different ways. Lucic combines some of both of those, as a cagey and tough competitor.

The Kings also picked up some scoring depth in Vincent LeCavalier. LeCavalier is nothing if not streaky but he should not be ignored. He has a lot to prove after his dismal stay with the Philadelphia Flyers. Since he is supposed to retire after this season, he can be expected to give it his all.

For the Kings, I would not identify particular players as x-factors. Rather, their tendency to start slowly should be seen as the critical factor. If they let the Sharks get ahead of them, they might not catch them again. If the Sharks can avoid having key players injured early, the Kings might not need to spot them the lead. They might just take it fair and square.