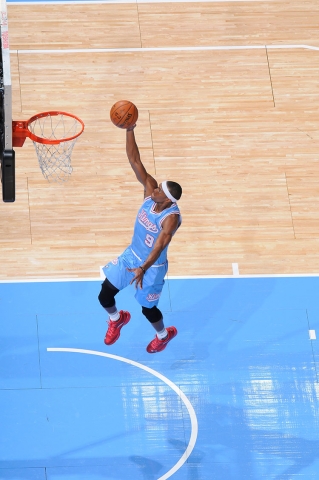 SACRAMENTO- For most teams in the NBA, playing without your only All Star is a difficult task. Tonight, the Kings were without their All Star center DeMarcus Cousins who was suspended by the team for “conduct detrimental to the team.”

This season, Sacramento is 2-7 without Boogie and 13-40 since Cousins first joined the team back in 2010. But, the team did put themselves in a position to win.

Rajon Rondo came out of the half and had a great third quarter. Rondo hit a three pointer at 6:38 to give the Kings their first lead of the game, 64-61. The Kings struggled to shoot the ball efficiently and Orlando took the lead right back in the quarter. Rondo’s 10 points and four assists in the third alone kept the Kings alive. The Magic led, 80-75, through three quarters.

The Kings fell off defensively in the fourth quarter. While the Kings defense was pretty solid through three quarters, they allowed Orlando to shoot 52.6% in the fourth. The Magic were able to go up by 14 a little less than half through the final quarter, there Kings were never able to get back into after.

The Kings cut the lead to six but with only 18 seconds in the game and no hope of a victory.

The Kings dropped their fourth straight game, 107-100, as their offense struggled, turnovers were in bunches and the team was out rebounded.

Without DeMarcus Cousins the Kings struggled to find offense.

Orlando’s fast start to the game put the Kings at an early disadvantage. The Magic came out with confidence going on a 12-0 run to start the game. The Magic out hustled the Kings throughout.

The Kings had little ball movement, dribbled way too much and had little presence inside when they struggled. This was true for most of the game with the Kings turning the ball over 17 times leading to 24 points for Orlando.

Aaron Gordon made his return to Northern California with 20 points and 11 rebounds. Victor Oladipo totaled 18 points while Evan Fournier and Jason Smith both added 16.

Marco Belinelli had a solid game as he’s been shooting much better, 4-7 from behind the arc, scoring 17 points. Kosta Koufous also played well in Boogie’s absence with 19 points. Rondo had a good game as well with 16 points, 7-14 from the field, and 14 assists.

Minus Cousins, the Kings were dominated inside. Out rebounded 51-37 and letting the Magic score 50 points in the paint. Unfortunately, the Kings missed shots that typically fall for this team. Sacramento shot at a poor 39.8% from the field.

Right now, the Kings will look to try and finish the season off strong, but some might hope to pile up a few more losses for a better pick.

The Kings will take on Utah on Sunday at 3 p.m. at home. We’ll see how the team fares with their big man back on the court.