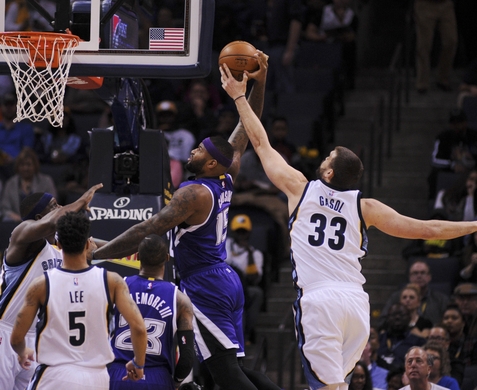 The situation is growing desperate as the Sacramento Kings – who had won five consecutive games – have now lost four straight games after losing to the Grizzlies 121-117 on Saturday night in Memphis.

The game was not close until the fourth quarter when the Kings came alive on offense and defense. Sacramento (20-27) started the game very slow trailing by 14 points after the first 12 minutes were over. At the half, the Kings still trailed the Grizzlies by 14 points.

The Kings lackluster play continued in the third quarter and they found themselves down to Memphis (28-20) by 15 points as the fourth quarter began.

In the fourth quarter, Darren Collison and Rudy Gay led a mad charge on offense that would result in 40 points in the quarter for Sacramento. The Kings cut the lead to just one point off a Collison 3-point bank shot with 16 seconds to go but were unable to score after that basket.

The Kings comeback attempt was hampered when DeMarcus Cousins re-injured his left ankle after Marc Gasol rolled over the ankle with 2:02 left in the game. Cousins missed time in second quarter when he rolled the left ankle while driving to the basket.

Ultimately, the Kings were unable to overcome their slow start and lack of defense which led to their fourth consecutive loss.

Rudy Gay led the Kings scoring attack putting up 21 points in 38 minutes of playing time. Gay shot 6-for-12 overall, 2-for-3 from 3-point range and was a perfect 7-for-7 from the free throw line.

DeMarcus Cousins posted another double-double game scoring 17 points and grabbing 14 rebounds in just 30 minutes on the floor. Cousins had a horrible shooting night hitting on just 3-of-17 field goal attempts. He was 10-for-14 from the charity stripe.

Rajon Rondo scored 15 points and recorded eight assists but was charged with seven turnovers. Rondo fouled out of the game late in the fourth quarter.

Darren Collison put up 20 points coming off the bench with 14 of those points coming in the final quarter. Collison shot 50-percent from the field connecting on 7-of-14 shots.

Omri Casspi also supplied some punch off the bench. Casspi also shot 50-percent from the field hitting on 6-of-12 attempts.

Sacramento shot just 41.3-percent (38-of-92) from the field. They turned the ball over 19 times and that resulted in 26 Memphis points. The Kings had just 16 assists in the contest.

Jeff Green led the Memphis scoring attack coming off the bench and putting up 29 points. Green was 11-for-16 from the floor, 3-for-5 from beyond the 3-point arc and a perfect 4-for-4 from the free throw line.

Marc Gasol scored 22 points and dished out five assists in the game. The Kings had no answer for Gasol until the fourth quarter.

Courtney Lee was also a force to be reckoned with as he scored 18 points going a perfect 5-for-5 from the floor (3-for-3 from 3-point range).

The Grizzlies exceeded their 96-points per game average by 25 points on Saturday night.

The Kings returned to Sacramento after the game and will host the Milwaukee Bucks on Monday night at Sleep Train Arena. The Bucks have lost two consecutive games and have a 20-29 record on the season.

The Kings need a win over the Bucks as they will have to face the third best team in Eastern Conference – the Chicago Bulls – on Wednesday night in Sacramento.

Sacramento will then head out on a four-game road trip that will take them to Brooklyn, Boston, Cleveland and Philadelphia before the All-Star break.