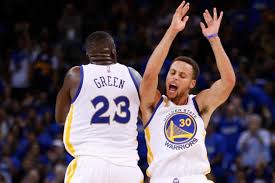 The Golden State Warriors beat the Los Angeles Lakers 116-98 Thursday night at the Oracle Arena. The Lakers’ Kobe Bryant, retiring after the season, made his final appearance in Oakland. Bryant played about 28 minutes and left the game late in the fourth quarter. The fans, both Warrior and Laker fans, gave Bryant a standing ovation. The Lakers, who are rebuilding, fielded a very young lineup. They played the Dubs fairly even in the first half. Golden State did not shoot well from the floor as their field-goal percentage was just 35.6%. The Dubs led by one at the end of the first period and by three at the half 52-49. Steph Curry and Klay Thompson led the Dubs with nine each. Jordan Clarkson and D’Angelo Russell led the Lakers with ten each while Lou Williams pitched in with nine.

The Dubs were not successful extending the lead early in the third period.  They had a seven-point lead midway through the period but the Lakers would not quit. The Lakers kept coming back and closed the gap to three trailing 73-70. At this point, the Warriors went on a 12-2 run to take a ten-point lead with 1:26 left to play.  Dubs lead by fourteen 86-72 after three periods.  Steph Curry made two key three-point shots in the period. Steph, at this point, had made eight three-point shots good for 24 points. He made a dunk late in the period. It was his only two-point basket in the game. Steph finished with twenty-six points.

The Warriors bench extended the lead to twenty to start the fourth period. Shaun Livingstone and Leandro Barbosa were huge off the bench. The Lakers tried but could not catch up. They did cut the deficit a little bit but the Warriors refused to wilt and the Dubs won again at home by a final score of 116-98.

Game Notes- The Warriors are 19-0 at home this year and have won 37 consecutive games in a row at Oracle Arena. Their record for the season is now 37-3. Steph Curry led the Warriors in scoring with 26 points. Klay Thompson had twelve and Draymond Green added seven and had nine rebounds to his credit. Shaun Livingstone, Leandro Barbosa and Harrison Barnes scored seventeen, fifteen and twelve respectively. With the loss, the Lakers drop to 9-32 for the season. Jordan Clarkson scored twenty for LA. Lou Williams added eighteen while Julius Randle and D’Angelo Russell each had fourteen.  Kobe finished with eight.