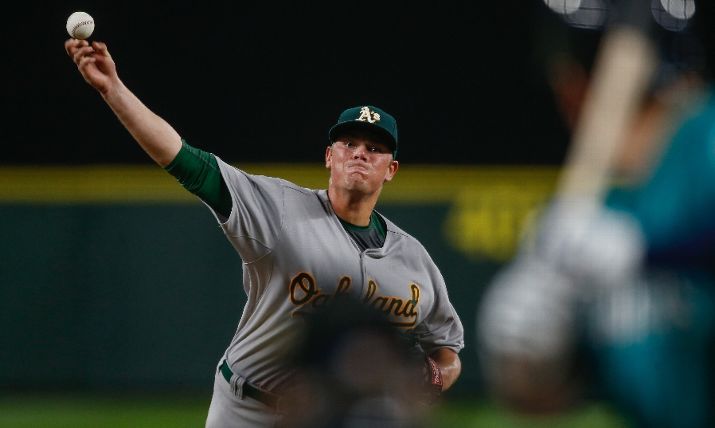 SEATTLE – Aaron Brooks earned his third win of the year behind seven strong innings against the rival Seattle Mariners. Brooks scattered six hits over seven innings and only gave up a pair of runs in the fifth. Sean Doolittle continued his strong comeback as he came up in the ninth and took out the side in order.

Danny Valencia was again the A’s shinning star tonight as he went 3 for 4 with 2 RBI and and a pair of runs. Billy Burns and Josh Reddick also contributed a pair of hits on the night.

The A’s got back to back singles in the third inning from Sam Fuld and Billy Burns and then with Mark Canha up Iwakuma pitched a ball and Mariners catcher Jesus Sucre tried to pick off Burns at first. Logan Morrison fielded the ball but then tried to pick off Fuld at second but the ball trickled under the shorts stops glove into short center field and Fuld was able to score all the way from first to give Oakland a 1-0 lead.

In the fourth the A’s swatted back-to-back-to-back singles from Danny Valencia, Stephen Vogt and Billy Butler to load the bases for Brett Lawrie. Lawrie ground into a force out at second but was able to drive in Valencia to give the A’s a 2-0 lead.

The Mariners gathered two runs in the fifth inning behind a Brad Miller homer and a single by Nelson Cruz to center field to drive in Jesus Sucre to make it a 2-2 game.

Danny Valencia broke the tie in the top of the eighth when on a 1-2 count Valencia launched a deep shot to left center field for his 17th homer of the year and make the score 4-2.

Bob Melvin sent in Sean Doolittle to close the game in the bottom of the ninth. Doolittle struck out the first two batters he faced and was able to get the last batter of the game to softly ground out to second base and seal the Oakland 4-2 victory.

Today’s win was only the seventh win on a Friday for the year for Oakland and only their second win in Seattle this year.