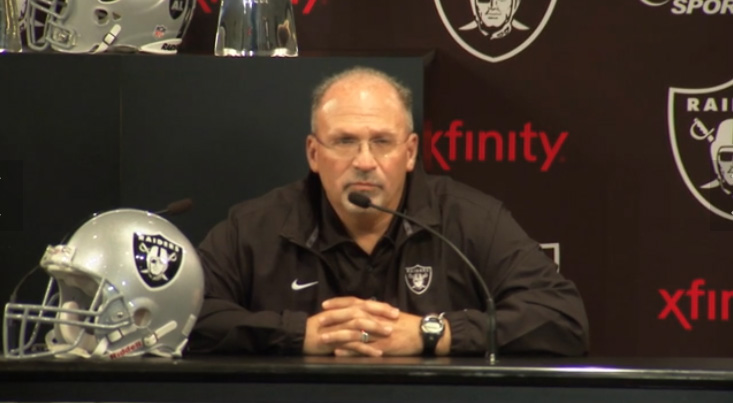 ALAMEDA — There’s no sugar-coating needed. The Oakland Raiders are a sinking ship with no relief in sight.

The 2014 season was touted as a step in the right direction for the Silver and Black. With an influx of  established veterans that have playoff and championship experience, Oakland was expected to compete for the playoffs.

Now, the team is closer to competing for the No. 1 draft pick in next year’s NFL daft rather than a team trying to get into the “tournament.”

After Sunday’s 38-14 drubbing at the hands of the Miami Dolphins that left Oakland rudderless at 0-4, Oakland made the change that everyone saw coming when the organization fired embattled head coach, Dennis Allen late Monday night via telephone by Raiders general manager, Reggie McKenzie.

Sure there have been questions of the lack of talent the team had, but it was Allen’s lack of progress in the win column that eventually led to his downfall. Bottom line in the NFL, you have to win games any way you can and Allen never was able to win more games than he lost.

Per NFL sources, Allen’s was already on the hot seat after Oakland’s embarrassing 30-14 home loss to the Houston Texans in Week 2. Allen was certainly set to be fired should Oakland lost to Miami in London.

“After thorough evaluation, we have determined to move in another direction,” said McKenzie during Tuesday’s press conference. “We appreciate Dennis Allen’s dedication to the organization and wish him and his family nothing but the best in the future.”

Offensive line coach Tony Sporano will take over the team as the interim head coach.

“Tony Sparano has a strong presence in this organization,” McKenzie said in a statement. “His experience and leadership qualities will serve the team well in helping reach the goal of everyone here, which is to win football games.”

In his first year in Miami, the Dolphins went 11-5 and won the AFC East title, but never had more than seven victories in any season thereafter.

During Tuesday’s press conference, Sporano lamented how much he respects Allen, but Oakland will have a different philosophy under his watch.

“Again, I respect Dennis Allen tremendously, but I’m not Dennis, Dennis is not me,” Sporano said. “Things can change with philosophies and that will be the case. We will have a different philosophy.”

Sporano will have his work cut out for him on both sides of the ball.

Defensively, the Raiders need to find a way to stop the opposing team’s running game. Oakland is surrendering 158.2 yards per game on the ground, which is 31st in the League. The signings of LaMarr Houston, Justin Tuck, and Antonio Smith have shown nothing to believe that Oakland can stop teams from hammering the ball down their throats.

With the bye week coming at the right time for Oakland this week, it will give the the players (who along with McKenzie should accept equal blame in the team’s poor performance) time before the schedule gets really crazy for the Raiders.

After the bye, Oakland will host San Diego and Arizona, before hitting the road against Cleveland and Seattle. San Diego, Arizona, and Seattle are a combined 8-2 on the season, while the Browns are 1-2, but have played tough despite their record.

Even with the changing of the guard at head coach, things could get worse in Oakland before they get better for the Silver and Black