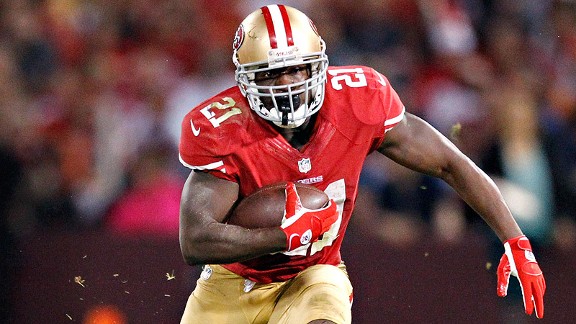 This Sunday at 1:05pm the San Francisco 49ers (6-2) will be taking on the Carolina Panthers (5-3) at the friendly confines of Candlestick Park. This matchup features two teams who have been on a roll over the past few weeks. The 49ers have won five straight, and are in second place in the NFC West, just one game back of the Seattle Seahawks. The Panthers had a shaky start, but have hit their stride, rattling off four wins in a row, putting themselves in second place in the NFC South, one game behind the New Orleans Saints.

San Francisco is coming off of their bye week, but two weeks ago they easily dismantled the Jacksonville Jaguars, coasting to a 42-10 victory. The 49ers quickly put the game out of reach, mounting a 28-3 lead by half time. San Francisco stuck with what has got them here, and did most of their damage on the ground, rushing for 221 yards as a team. Frank Gore ran for 71 yards and two scores on 19 carries. Colin Kaepernick had two rushing touchdowns of his own to along with 54 yards on seven carries. For good measure, Kendall Hunter also got in on the action, compiling a team-high 84 yards on the ground on just nine attempts. On the defensive side the 49ers suffocated the Jaguars offense, not letting them ever get much of anything going. The highlight was a Patrick Willis forced fumble that Dan Skuta returned for a touchdown.

The Panthers should present a much more formidable opponent. On offense they have their own electric duel threat at quarterback in Cam Newton. His primary weapons are running back DeAngelo Williams, who is having a solid but not great season, tight end Greg Olson, who is leading the team in receiving yards, and old reliable Steve Smith, who isn’t the dominant player he once was, but still poses a threat. Their defense is easily their biggest strength, however. Young linebacker Luke Kuechly has been fantastic, lead the team in tackles and tied for the team lead in interceptions. Pass rushers Charles Johnson and Greg Hardy have consistently been giving opposing quarterbacks a hard time. As a unit they have allowed the second fewest yards and second fewest points per game in the NFL.

Sunday’s contest is a classic case of strength meeting strength. The 49ers have the fourth best rushing offense in the league, and they will be going up against the league’s best rush defense. Expect San Francisco to stick to their game plan, however, and go with a ground and pound approach. Depending on their success, however, they may need Kaepernick to air it out more than he has in recent weeks. Carolina’s defense hasn’t been as strong against the pass.

Mario Manningham and Aldon Smith are both expected to be active. It remains to be seen how limited they will be initially, but they could provide a big boost in what could be a tough week.